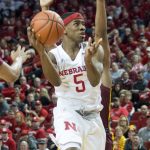 Northwestern ended the first half on a 10-2 scoring run to take a 30-25 lead at halftime, but Nebraska proved to be the much better team offensively down the stretch.

It was Nebraska’s first true road win of the season, and their first win at Northwestern since Feb. 8, 2014.

“It was a great, back-and-forth game,” junior forward Isaac Copeland said afterward on the Husker Sports Network. “We kind of separated ourselves between the 7:00-5:00 minute mark in the second half. We really attacked them on the offensive end, and got stops on defense. So, we really performed down the stretch.”

Nebraska took its first lead of the second half at the 11:30 mark with a jumper by sophomore forward Isaiah Roby to go up 37-36.

The Huskers led 56-46 with 5:41 to play after a highlight-reel worthy dunk by Copeland to give Nebraska its first double-digit lead.

He comes off the curl and brings excessive juice to this @HuskerHoops hammer. 😱 pic.twitter.com/uhh5cWtYrf

“We found some attitude in our team,” Copeland said. “We were out there talking back and forth, talking to each other…you’ve got to have some grit, some anger with you on the road to win in the Big Ten.”

Junior guard James Palmer, Jr. was right behind him with 18 points on 7-of-11 shooting from the floor. 15 of those points came in the second half.

Copeland finished with 13 points and a team-high eight rebounds.

“We wanted to come out here and get a win,” Copeland said, “especially with all of our kids on our team from Chicago (Watson – St. Joseph School, Roby – Dixon, IL, Nana Akenten – Bolingbrook, IL). We wanted to perform for their families. We sucked it up and got it done.”

It wasn’t the prettiest win in the world, but Nebraska isn’t interested in style points.

“We didn’t play our best, but it’s not about playing your best,” Copeland said. “It’s about winning the game, so we found a way to get a ‘W.'”

Northwestern was without senior guard and assist-leader Bryant McIntosh, who injured his knee early in the second half of the Wildcats’ 95-73 win on Saturday.

“They’re not the same team without McIntosh,” Nebraska head coach Tim Miles said. “I thought they were easier to disrupt and get kind of discombobulated.”

“We played Pardon one-on-one,” Miles said. “We talked about doing that, and he did get 17 points, but on 18 shots. Probably one of his least efficient games he’s had in awhile, and definitely against us. Our centers, all of those guys, were up for playing against him.”

Junior forward Vic Law, who leads the Wildcats with a 46 percent shooting percentage from the three-point line, finished with just eight points on 2/11 shooting and 0/4 from beyond the arc.

“(Assistant coach Jim Molinari) said, ‘We can blow these guys out.’ An older gentleman who’s all about the right things, an experienced guy, who’s been a head coach (1989-2014) said, ‘This is what you’re capable of.'”

Nebraska will stay on the road this Saturday when they head to Mackey Arena in West Lafayette, IN to take on No. 13 Purdue (13-2, 2-0 Big Ten).