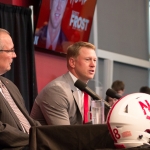 Freshman cornerback Antwan Collier picked off Auburn’s sophomore quarterback Jarrett Stidham with just 24 seconds left to seal a 34-27 victory for No. 12 ranked and 13-0 Central Florida in the Chick-Fil-A Peach Bowl at Mercedes-Benz Stadium in Atlanta, GA.

In Scott Frost’s final game on the UCF sideline, the Knights finished the 2017 season as the only unbeaten in the FBS ranks; just two years after UCF finished 0-12.

“To think that they’re sitting here, Peach Bowl champions and 13-0 in two years, I couldn’t be happier for them,” Frost said. “I look forward to going and hopefully turning another group of guys into the same type of family that has love for each other like these guys do.”

Knights sophomore quarterback McKenzie Milton threw for 242 yards and two touchdowns. He also ran for 116 yards and a score.

On defense, senior linebacker Shaqueem Griffin was all over the field. The AAC Defensive Player of the Year led the Knights with a dozen tackles, including 3.5 tackles for loss.

There was speculation leading up to the Peach Bowl on if Frost and his staff, while trying to balance bowl prep and Nebraska recruiting, would be able to get UCF properly prepared for their New Year’s Day battle with Auburn.

It was a gamble, but Frost hit the jackpot.

“I didn’t know if these guys would be able to (overcome the distractions),” Frost said. “I came back, because it was the right thing to do, and I wanted to help give them the best chance that I could, and they surprised me again with their heart and their resiliency.”

UCF’s win on Monday has opened up more discussions as to whether or not the College Football Playoff should expand from the current four-team format to an eight-team field. UCF, despite being the only team in the FBS ranks this season, was ranked just 12th in the final playoff poll.

The Knights beat an Auburn team that defeated No. 4 Alabama and No. 3 Georgia in the regular season.

“We just beat a team that beat two playoff teams and lost to another one (Clemson) by eight points and we beat (Auburn) by seven,” Frost said. “Auburn’s a great team. I’m not taking anything away from them, I give them a ton of credit, but these guys deserve everything they get, and they deserve more credit from the committee than what they got.”