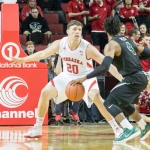 LINCOLN – Nebraska has officially avoided an embarrassing home loss to a mid-major program for the first time in four years.

“In my mind, the underdogs won tonight,” head coach Tim Miles said. “If you look at this game and you look at the way Stetson played, they outplayed us. They had better energy. They ran their stuff better. They defended way better. Not our best night, but I credit Stetson for that.”

Juniors James Palmer, Jr. and Isaac Copeland each led the Huskers with 13 points, but the difference Friday was made by another junior; Tanner Borchardt.

“We were lucky enough to have an underdog in Tanner Borchardt that came out and really did some great things in a short amount of time,” Miles said. “I thought it helped steady us, give us a little bit of a lead, and a shot of confidence. Sometimes, you need that, and he really served that purpose tonight.”

“It was very timely of course, with him earning a scholarship last week and then following through on it this week. I was very proud of him.”

Just one week after being put on scholarship, the former walk-on from Gothenburg, NE finished with ten rebounds, eight points, two blocks and 14 minutes; all, as you may have guessed, career-highs.

“Whatever Coach (Miles) wants of me, I’m going to go in there and do,” Borchardt said, “and he told me coming out of halftime that he was going to use me off the bench, so I just had to stay ready. It’s all of those reps in scout team getting me ready for this moment.”

All of Borchardt’s minutes came in the second half. Before he checked in, sophomore center Jordy Tshimanga was having arguably his best game of the season.

The 6-10 Quebec native finished with a team-high tying ten rebounds and a season-high tying six points.

“Just like T, Jordy played well, too,” Taylor said. “That’s big for our fives to have 20 rebounds combined together. Jordy and Tanner are both going to get better each game.”

Tshimanga, who played 13 of his 16 minutes in the first half, was probably Nebraska’s best player in the first 20 minutes.

“I thought we were a little offensive sensitive,” Miles said of the first half. “It was 5-2 (at the first media break), and I said, ‘Guys, you know, all we’ve done is pass around and kind of wait for somebody to come in and set the ball screen, or flash it in the high post.'”

The Huskers responded in the second half, shooting an efficient 15/34 (44.1 percent) down the stretch and outscoring the Hatters 47-38 after intermission.

“At halftime, we just stayed positive, said we were going to stay together and go out and play a better second half than we did first half,” Taylor said.

Miles said after Friday’s game that ten wins was the bare minimum his team could have through the first 15 games in order to stay in tournament contention.

Nebraska got its tenth victory by using the bare minimum, at least in the first half, to dive back into conference play with three straight wins and momentum.

“We’re 10-5, that was our bare minimum for our goals,” Miles said. “We met our goals. Now, it’s time to go and make progress in the Big Ten, and really, that’s what we’re here to do. I’m excited for the league. I told our guys we’re going to be the underdogs four of the next five games (@ Northwestern, @ Purdue, Wisconsin, @ Penn State, Illinois) at least.”

Nebraska hits the road on Tuesday to take on Northwestern (9-5) at Allstate Arena. Tip-off is set for 8 p.m. central. The Wildcats face Brown at home on Saturday at 11 a.m.

“He got knocked in the nose, he a swollen nose,” Miles said, ” and that didn’t help him, but Glynn will be fine. I really do believe that. I need to give him more help than we’ve been giving him. I just don’t think I moved him around enough tonight.”