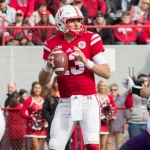 Nebraska quarterback Tanner Lee will forego his senior season and enter his name for the 2018 NFL Draft, according to a statement posted on his Twitter page Thursday.

To Husker Nation: Thank You! pic.twitter.com/1MQYtpMusL

In the statement, Lee thanked former head coach Mike Riley and his staff for giving him the opportunity to play at Nebraska.

He also wished head Coach Scott Frost and his staff the best of luck, saying “Nebraska is in great hands.”

Lee told HuskerOnline on Thursday that Frost was a great mentor for him during his decision process.

“I was able to talk to (Frost) a lot about that,” Lee said. “He laid out what he thought was best for him and best for Nebraska. He told me if I wanted to stay, I am more than welcome to stay, and he’d love to have me. He said I’d be his guy and we’d roll from there, and I believed him. After that, he told me to also do what’s best for me. He definitely laid it out for me that he can’t tell me what to do, because it’s up to me, and that he’ll support me either way.”

Lee started all 12 games for Nebraska this past year, throwing for 3,143 yards, 23 touchdowns and 16 interceptions while completing 57.5 percent of his passes.

Lee arrived at Nebraska in early 2016 after spending 2014-15 at Tulane. In his two seasons with the Green Wave, Lee threw for a combined 3,601 yards, 23 touchdowns and 21 interceptions.

Lee enters a 2018 draft class that has many potential first round picks, including UCLA’s Josh Rosen, Oklahoma’s Baker Mayfield, Wyoming’s Josh Allen and USC’s Sam Darnold, who hasn’t declared yet, but is widely expected to be a first round pick.

Many of Lee’s teammates expressed their support and congratulations on social media Thursday.

Tanner Lee has what it takes to be something special at the next level….and im rooting for him all the way

It has been awesome to get to know you these past two years I wish you nothing but the best #gbr https://t.co/lX4bx7wUYw

Great football player and better person! Can’t wait to watch you sling it at the next level. Good luck bro! @TannerLee13_ https://t.co/8gPs9abpZw

Remember what we talked about bro, now go be great and stunt on every doubter out there ✊🏾💯💯💯 https://t.co/kUH1DX4Hn1

It’s finally here Bro, you’ve work very hard to go after your dream, “THE NFL”. That is what we play College football for right?
Goodluck bro Love ya. https://t.co/9pSgLpn0Re