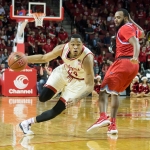 LINCOLN – Other than one scoring lapse in the second half, Nebraska was essentially able to put this one on cruise control.

“I think we’re in a good position right now, being 9-5,” junior guard James Palmer, Jr. said, who led his team in scoring with 18 points on 6-of-11 shooting. “We’ve got to go into the New Year with more intensity into the next game, and when we get into Big Ten conference play.”

“We had to play the second half like it was 0-0,” Gill said. “We struggled with that a little bit, but we made a run at the end and kind of pulled away, so that was good, too.”

Nebraska suddenly rediscovered their offense, producing a 12-2 run of their own to go up 71-50 with 6:15 left.

Despite a slow stretch in the second half, the Huskers had a solid shooting night, hitting 51 percent (31-60) from the field. They also hit 13-of-27 from three-point range.

That’s the most three-pointers a Tim Miles team has ever made in a game.

Leading 82-61 with two minutes left, Miles cleared the bench, which led to freshman guard and Reykjavik, Iceland native Thorir Thorbjarnarson hitting the first two three-pointers of his career, much to the crowd’s and the Nebraska benches’ delight.

“Eight family members came over from Iceland (to watch him play),” Miles said. “To be able to get him in the game, and then to make those two threes is pretty cool stuff. It was a neat night that way.”

Junior forward Tanner Borchardt played three minutes on Friday and didn’t score, but he had a special surprise waiting for him after the game.

“I’d just like to introduce our newest scholarship member of the Huskers,” Miles said with a big smile as he entered the media room with the 6-8 junior forward from Gothenburg, NE.

“It’s well-deserved. Tanner has helped us in games, and he’s changed his body. Put himself in a situation where I feel confident when we do need him…we’re proud of him and happy to have him and ease the load a little bit for the family.”

Borchardt, the 13th Husker on the roster on scholarship, left the program after the 2015-16 season, and then rejoined more than halfway through last season on Feb. 2, 2017.

He went through a full offseason program, put on a significant amount of muscle, and Miles said before the season began that Borchardt was in the best shape he had ever seen him.

The hard work paid off.

“Santa brought a present to the locker room,” Borchardt said. “Got a little Christmas cookie that said ‘Congrats,’ and then I got a shower full of teammates for about a minute. Just a big jump-and-huddle. What a blessing.”

Borchardt has tallied six points and 16 rebounds so far this season.

The Huskers will take a week off, and then conclude conference play on Dec. 29 when they host the Stetson Hatters. Tip-off is set for 7 p.m.

>> 14 points were a new career-high for Thomas Allen, who finished 6-of-11 from the floor and 2-of-6 from three. He played 26 minutes on Friday, subbing in for junior guard Glynn Watson, Jr. who hurt his ankle late in the first half. Watson returned and got back on the floor, but only played 15 minutes, which was a season-low for him.

“Tom Allen, I thought, was good,” Miles said. “Some nights, when guys just aren’t quite there, as a coach, I felt like it’s necessary to send a message like, ‘Listen. Tom has to prove to me he can’t play. If somebody is struggling, I’m going to run him out there.’ I know Anton can do it, and Isaiah (Roby) and all of those guys. I thought Jordy (Tshimanga) had better minutes tonight.”

Miles has been on the losing end of non-conference games in late December before. He’s happy not to be this time around.

“These Christmas times are just really difficult, and we’ve been through it,” Miles said. “Got one more (Stetson) to go. We’ll be locked in, and we’ll find enough guys who can do it. Tonight, we did. We have more depth.”

“Once Big Ten play starts, anybody can beat anybody,” Roby said. “You see the scores, but going into the (conference season), nobody’s record really matters.”