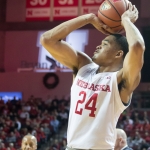 During several instances in the second half on Wednesday, it looked like Texas-San Antonio was going to do the same thing in 2017.

On a bad defensive night, particularly at the perimeter, Nebraska had enough offensive firepower to survive.

Early on, it didn’t appear that either team was going score anything remotely close to 94 or 104 points.

In the first 5:09 of the game, both teams had scored a combined 11 points.

“Tonight was one of those nights where it felt like we were running in mud early,” Nebraska head coach Tim Miles said. “Not a lot of spark. Looked like we were in a fog so to speak.”

Miles said his team later “got some really good sparks,” particularly with Gill coming off the bench and scoring a career-high.

In warm-ups, Miles wasn’t even sure Gill would be able to play.

“(Gill) had a migraine in the pregame,” Miles said. “Wasn’t even able to go through pregame. Kind of a question mark going through warm-ups. Then finally, at game time, he’s like, ‘Yup. I’m going to give it the old try, right?'”

“You look at 21 points later, and you’re like, ‘Huh. That worked out pretty good.’ We needed him.”

UTSA came into Wednesday’s game scoring 86.6 points a game; the 20th highest average in the country. They were the fourth straight opponent Nebraska faced that has an offense ranked in the top 30 nationally in scoring.

Miles tried telling his team before the game that UTSA’s offensive numbers were fairly similar to Michigan State’s, Creighton’s and Kansas’.

The Huskers may not have fully realized it until afterward.

“(UTSA) can score the ball very well,” Nebraska junior guard Glynn Watson said. “I think we did a good job at the end of the game.”

“Just a couple of defensive stops and we were able to score,” Miles said. “I think that just relaxed us a little bit.”

In those past flops against Samford or Incarnate Word or Gardner-Webb, the Huskers never seemed to have enough offensive firepower to shoot themselves out of a jam.

Nebraska scored 104 points and shot 50.9 percent from the floor on Wednesday, and they needed every bit of that to secure a victory.

“I think we showed some toughness mentally,” Miles said, “and just did enough and have enough talent, too, to be better.”

UTSA was particularly pesky from the three-point line, where they made 15-of-31 shots. Freshman  guard Jhivvan Jackson, who put up 31 points at Oklahoma on Dec. 4 earlier this season, scored a team-high 26 points for the Roadrunners on Wednesday.

The Roadrunners tied the game five different times in the second half, but were never able to grab a lead.

“I think it proves that prayers do work,” Miles said. “It was important. This team, especially, I think we need to play from the front. We’re best from the front.”

Another reason for Nebraska not losing the lead in the second half might have been free throws.

Nebraska shot a season-high 50 free throws and made 37 of them. UTSA was just 9-of-10 on foul shots.

“We added a couple of little things to try and get to the foul line more,” Miles said. “We ran them and did get fouled, and so, that’s a good start. When we can get downhill a little bit, it opens everything up, too. Should make more of them. I think we left four front-end (misses) out there.”

In Nebraska’s previous two games against Creighton and Kansas, they only got to the free throw line 11 times combined.

“We talked about it (on Tuesday),” senior guard Evan Taylor said. “Just get to the rim. (UTSA) doesn’t really have a shot blocker or anything like that, so you just attack the paint. Make layups, make them foul you. Tonight, we struggled from the free throw line a little bit, but you know just got to get better. It’ll come. We’ve just got to get better and put it all together.”

The Huskers have Thursday off, and are right back at it on Friday evening when they take on Deleware St. (2-11) at Pinnacle Bank Arena. Tip-off is set for 7 p.m.