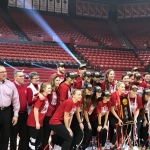 Nebraska’s five seniors probably thought their last time to salute Husker Nation at the Devaney Center was the first and second of the NCAA Tournament on Dec. 1 and 2.

The Huskers hosted and swept both Stony Brook and Washington State that weekend, and went down to Lexington, KY the week after.

Playing in front of 14,000 people dressed in red in Kansas City was an added bonus, but Nebraska’s seniors never thought they’d get to say one last proper goodbye on their home floor.

They had that opportunity on Sunday.

It was a late night of celebration for the Huskers, who had to be back on the bus by 8 a.m. Sunday morning, and drive more than three hours back to Lincoln in time for the 11:30 event. Tired? Emotionally exhausted? Overwhelmed?

Yes, to all of the above, but the reception the team got upon their return made it all worth it.

“This turnout was just…there’s no place like Nebraska,” head coach John Cook said, with his fourth NCAA Championship trophy of his career in hand. “I mean, last night, over 18,000 down there and we filled (The Sprint Center), and then come back here. I know all of those people probably down there last night got back here this morning, so it means a lot and makes it all that much more special.”

Several thousand fans attended the free admission event on Sunday. With many familiar faces present, including athletic director Bill Moos, NU president Hank Bounds, and UNL Chancellor Ronnie Green, it was an event full of “With Each Other For Each Other” chants, highlight reels from the 2017 season playing on the big screens, speeches, and many well-deserved recognitions of excellence.

First, a well-deserved salute to the fans, for whom the entire event was put on for.

One of the most meaningful recognitions came when Coach Cook and Chancellor Green both recognized senior middle blocker Briana Holman for being the first member of her immediate family to receive a college diploma.

“From one first-generation college graduate to another, there’s no greater honor than giving you that degree,” Green said to Holman, “and others like you who received it (Saturday). I asked the first-gen graduates to stand in the (UNL commencement) ceremony, and it was about 20 percent of the 956 people in that room.”

Holman, who graduated with a degree in criminology and criminal justice, wasn’t the only senior to be recognized for academic excellence.

The other most meaningful recognition came when senior defensive specialist and Lincoln Pius X graduate Sydney Townsend was saluted for receiving the Elite 90 award for the second consecutive year.

The award is given annually to the student-athlete who has the highest cumulative GPA at each NCAA Championship event.

“It isn’t just an Elite 90 award in any old major,” Green said, “it’s in biochemistry.”

Even though Nebraska didn’t play Stanford in the tournament, Cook stills feels like his team beat them in perhaps a more meaningful way.

“I can’t tell you how good it feels when a Nebraska student-athlete gets that (Elite 90) award,” Cook said. “It’s the best GPA of all (players on) the Final Four teams, and Stanford’s sitting right next to us.”