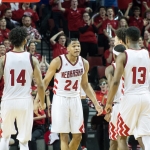 LINCOLN – There was 2:26 left in the game at Pinnacle Bank Arena on Saturday night.

All the while, Nebraska Volleyball had just won its first set in the national championship match against Florida in Kansas City.

For a blissful 10 minutes or so, all seemed right in the world for Husker fans. Volleyball. Basketball. Scott Frost’s magical introduction when starting lineups were announced. It was all aligning perfectly.

Volleyball won its fifth national title. Frost’s entrance will be watched again and again. Basketball, however, suffered yet another gut-wrenching defeat.

The Huskers’ (7-4) upset bid over the Jayhawks (8-2) fell just shy in the waning seconds, as senior guard Sviatoslav Mykhailiuk (Svee-At-Uh-Slahv Muh-Kie-Luke) hit a go-ahead three with 21 seconds left, lifting Kansas to a 73-72 win in front of a joyous-turned-petrified crowd of 15,207 fans.

“You know, with these guys, this is probably what hurts, it means something to these guys,” head coach Tim Miles said afterward, visibly emotional after his team fell short in a valiant effort.

The most raucous moment of the evening for Nebraska came when junior guard James Palmer, Jr. hit a layup with 41 seconds remaining to put Nebraska ahead 72-70.

Mykhailiuk, who finished with 14 points, hit the go-ahead shot just 20 seconds later on the very next possession after Kansas had called their final timeout.

“It was a good play,” Miles said. “When you look at the stats, it’s just deadlocked. They make one more play than we do. That’s what hurts.”

Nebraska still had plenty of time to get down the floor and get a shot. Any basket would have put them ahead.

Palmer grabbed the rebound and threw up a desperate shot from a few feet away, but a block by sophomore center Udoka Azubuike (Ew-Doe-Kuh Az-Uh-Boo-Kee) stifled any hopes of a Nebraska dream.

“Just tried to crash the glass, and I got the rebound, and I tried to back up, but I was off balance,” Palmer said. “Things didn’t go my way.”

Azubuike meanwhile finished with a team-high and career-high 26 points on 13-of-17 shooting. He posted his second career double-double with ten rebounds.

“That’s the best game he’s played since he’s been here,” Kansas head coach Bill Self said. “He was active, he rebounded the ball well on both ends, and the play he made there late was terrific.”

While Azubuike was the brightest spot for Kansas, the Huskers’ shining star in an overall well-fought game was freshman guard Thomas Allen.

With junior guard Glynn Watson picking up his second foul less than five minutes into the game, Allen stepped up in a huge way, scoring a career-high 13 points in 14 minutes.

Miles met with Allen earlier in the week to tell him that his role was only going to increase going forward.

“Thomas was so good, I was so proud of him,” Miles said. “He came in and lit them up, and then he kind of got a little over zealous and made some mistakes, but he was really good. His points-per-40 (minutes) were probably like 100. I was happy for him.”

It was an all-around team effort for Nebraska. They shot a solid 49.2 percent (29/59) from the field, they evened Kansas with 33 rebounds and ousted them in three-pointers made 8-7.

“Don’t let this game beat us twice. Got to come to work Monday ready to roll.”

Nebraska is back home Wednesday to take on Texas-San Antonio. Tip off is set for 7 p.m.

In Case You Missed It

Tonight’s intro. Doesn’t get much better than that. #Huskers #Nebrasketball pic.twitter.com/sBJyowxcLl

“I wanted Scott out there in the beginning with us,” Miles said. “I want them to know we’re behind him. Scott, he doesn’t want to screw with our mojo or anything that’s going on. He’s just so humble, it’s just ridiculous, but that’s what everybody loves about him. I’ve known him for three or four years. We’ve played golf, gone out for dinner.”

“I thought it’d be a really cool thing to start the game off with, and I thought it was. I got chills.”