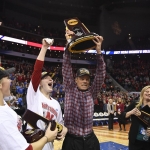 John Cook said on Aug. 7 that he wanted his team to be good at the beginning of the season, great by the start of conference play and unstoppable in the NCAA Tournament.

Check off all of those.

“I feel very honored and privileged to be around a team and a staff that’s had an unbelievable belief in what we could do,” Cook said. “As head coach, sometimes you don’t think, I don’t think we’re very good, but these guys gave everybody an example in the sport of volleyball that you don’t have to have five All-Americans.”

Nebraska (32-4) ended its season on a 19-match winning streak, and are national champions in volleyball for the fifth time as a program after topping Florida (31-1) in four sets at the Sprint Center in Kansas City, MO on Saturday night in front of a mostly red-clad crowd of 18,516.

“The other thing I want to say is how cool is this for volleyball? 18,000, sold out, happened to be close to Nebraska, which was a big help,” Cook said. “But those fans still traveled down here to fill this place, and what a great statement for the sport of volleyball and how it’s growing. It’s pretty cool.”

Junior outside hitter Mikaela Foecke led the charge for the Big Red with a match-high 20 kills on a .250 hitting percentage.

“I wouldn’t want anyone else to be the most outstanding player other than Kelly,” Foecke said. “She’s the most deserving person on our team. She works so hard every single day, and she’s such a great leader and mentor to all of us. We definitely wouldn’t be here without her.”

Foecke was named the Most Outsanding Player in the NCAA Championship for the second time in her career, becoming just the fourth player in history to receive that honor more than once.

“Mikaela is a special talent,” Cook said. “She rises to the occasion and she has become a really good six-rotation player. One of the reasons we had her do that is to have her hit out of the back row, but you have to be able to play defense and pass as well. She’s worked really hard to get to that point. It’s very rewarding to see when players blossom like that.”

Hunter finished her career with a remarkable 16-1 record in the NCAA tournament as Nebraska’s starting setter. She finished Saturday’s match with 37 assists and a season-high six kills.

“This is my favorite group since I’ve been here,” Hunter said. “We proved a lot of people wrong. We grinded all season long, and it was a long season. But we worked every single day and that made us so close. I’m going to remember this group for a really long time.”