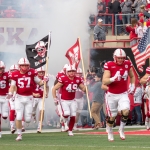 Nebraska has added a total of six home games to its future football schedules, according to a press release from the athletic department on Wednesday.

The Huskers added a home game against South Dakota State in 2020, Georgia Southern in 2022, and North Dakota in 2026.

The Big Ten Conference announced earlier this year that Big Ten schools are allowed to schedule FCS opponents in seasons with only four conference home games.

The addition of North Dakota and Georgia Southern completes Nebraska’s non-conference schedules through 2022.

South Dakota State will also play at Memorial Stadium in the 2024 and 2028 seasons. Nebraska will open 2022 with North Dakota at home, and face Georgia Southern one week later.

Nebraska’s full schedule’s through 2021, including Big Ten games, are now complete with these additions.