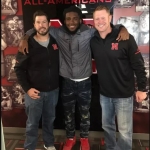 Nebraska picked up its third commit of the Scott Frost era on Monday night with Tampa, FL tight end Justin McGriff committing to the Huskers.

McGriff had been committed to UCF, and had an official visit to Lincoln over this past weekend. McGriff opened his commitment on Monday morning, and pledged Nebraska on Monday night.

McGriff will sign early on Dec. 20 and enroll for classes at UNL in January.

Nebraska’s 2018 class is back up to 10 verbal commits. The class now ranks 66th in the country on 247 Sports, but still last in the Big Ten.

It’s been an active couple of days on the recruiting trail for Nebraska Football. Four-star wide receiver Joshua Moore, who was the highest rated commit in Nebraska’s class at the time, announced his decommitment from the program on Sunday afternoon.

Moore had been committed to Nebraska since June.

About an hour later, the first commit of the Frost era came in the form of four-star safety C.J. Smith. Coming from Oxbridge Academy in Florida, Smith had an official visit to Nebraska this past weekend. He’s ranked as the No. 309 player in the 2018 class on 247 Sports. He chose Nebraska after also having official visits to Oklahoma, UCF, Baylor and Ole Miss.

Just a few hours after that, Nebraska picked up its second commitment of the day Sunday from junior college wide receiver Jaron Woodyard from Arizona Western College.

Woodyard also took an official visit to Lincoln this past weekend. A Maryland native, Woodyard is a top-50 receiver nationally and very fast.

According to Nate Clouse of HuskerOnline, Woodyard ran a 100-yard dash in high school in 10.68 seconds. He had 36 catches for 522 yards and six touchdowns this past season for Arizona Western.

The Huskers now have ten commits in the 2018 class. The class ranks 66th nationally and 14th in the Big Ten.