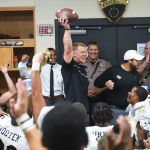 Frost was present at a Peach Bowl press conference in Orlando Tuesday, saying he and his entire coaching staff will do what it takes to give UCF the best chance possible to win the bowl game they qualified for.

“There’s been a lot of circumstances swirling around this season, and those have been tough to navigate,” Frost said. “The guys have done an unbelievable job with that. They’ve earned the right to play in this game and have this opportunity, and I’m grateful that we have a chance to give them the best possible chance that they have to put on a good show in Atlanta, and hopefully win the football game.”

Frost and his staff will still balance recruiting duties for Nebraska as they prepare for the bowl game.

There’ll be three practices in Orlando this week that Frost and his staff will run. This coming weekend, Nebraska will host nine official visitors before the dead period begins on Dec. 18. After that, Frost will run three UCF practices before Christmas.

After a couple days off, Frost and UCF will travel to Atlanta on Dec. 24 and then begin their bowl-week schedule.

Frost admit’s it’s not the most ideal situation, but he’s confident in the plan he has in place, and has always been committed to finishing the job he started with the UCF players he coached for 12 games.

“It’s not ideal circumstances, but they feel like the right thing to do is to be 100 percent committed and dialed in to help these young guys in a bowl game,” Frost said. “I think that gives us the best chance to win the game and that’s what we’re going to do.”