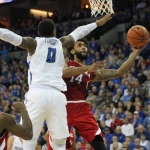 OMAHA –  Nebraska hit five threes in the first eight minutes of the game and built a 33-28 halftime lead, but the Huskers (7-4) got outscored 47-32 in the second half, and fell to Creighton 75-65 on Saturday afternoon in front of 17,901 fans at the CenturyLink Center Omaha.

“You have to credit Creighton,” Nebraska head coach Tim Miles said, who’s now 0-6 against the Bluejays in his sixth season with the Huskers. “I thought their second half was outstanding. They got downhill on offense.”

“If we’re going to beat a really good team on the road, and I think Creighton is a really good team, we have to have seven or eight guys being a star in their role and doing what they do, and we just didn’t have that tonight, even though we were right there. They made plays, so you have to give them credit.”

“I was surprised we didn’t get to the foul line more,” Miles said.

“Nebraska hasn’t won (against Creighton) in awhile, so I knew it was going to be emotional,” Harrell said. “Coach McDermott told us before the game, ‘Let emotion be our friend, and not let it take over us. I kept that in my mind, kept taking deep breaths, and rolled with my guys.”

McDermott credited the fans for getting into the game and feeding the emotions, which helped the Bluejays overcome the biggest scare they’ve gotten from Nebraska in some time.

“This is a really good win for us,” Creighton head coach Greg McDermott said. “I feel like this is Tim (Miles’) most complete team. They’re very disruptive defensively with their length and their size. Our plan was to try and keep them out of the paint, and to their credit, they hit five threes right away and got off to that good start.

“Honestly, I felt fortunate to only be down five (points at halftime) with ten turnovers and as bad as we shot free throws (2-for-7 in the first half).”

Jr. F Isaac Copeland led Nebraska with 20 points and 11 rebounds for his first double-double of the season. Jr. G James Palmer finished with with 16, while So. F Isaiah Roby had 10.

Jr. G Glynn Watson was guarded by 2016 Big East Co-Defensive Player of the Season Khyri Thomas, and the stats reflected that.

Watson finished with eight points on a rocky 4-for-14 shooting night. He also fouled out with 2:47 to play.

“I think (Thomas) got to Glynn,” Miles said. “There’s no doubt Glynn didn’t have his best night, and that length probably bothered him. We tried to shake him loose, but there’s no doubt I think that had an impact on him. Khyri is a terrific defender. Just so terrific. That was a tough matchup for us, especially when Glynn got into foul trouble in the second half.”

With their best player struggling, Nebraska couldn’t get over the hump late.

The Huskers lost the lead with 14:59 left, and never got it back. The fight still showed. Nebraska tied the game twice after losing the lead, and a three-pointer from Sr. G Anton Gill with 3:43 left made it a 58-57 ball game, but that’s as close as Nebraska would come.

The Huskers last real chance came with 1:04 to go when Jr. G James Palmer hit a two-point jumper to pull Nebraska within 66-63. Miles used Nebraska’s final timeout and called for a 1-3-1 zone defense.

Creighton was prepared, and Foster hit a dagger three-pointer to put the Jays ahead by six with 47 seconds left.

“They had scored four straight possessions,” Miles said. “Our 1-3-1 has been effective, and I thought it forced a difficult shot, but they made the play.”

The Huskers fell to 0-3 in true road games this season.

“We can’t go out and shoot 18-for-48 from (two-point range),” Miles said. “We have to get our two-point percentage up and clean up our inside shots. I really believe in our team. I can’t wait until we play next week. I’m sure this is going to make us sick to watch this film, but we’re going to get better from this.”

Nebraska has this week off due to final exams, but will be back in action on Saturday, Dec. 16 when they welcome No. 2 Kansas (7-1) to Pinnacle Bank Arena for a 7 p.m. CT tipoff.

The Jayhawks were upset by unranked Washington at Allen Fieldhouse 74-65 on Dec. 6.