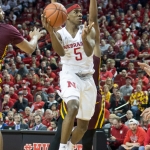 LINCOLN – Tim Miles said on Monday that Nebraska would have a chance against Minnesota if they watched the tape and “learned their lesson” from an 86-57 loss at No. 3 Michigan State on Sunday.

“It felt great,” Watson said. “We came in, quick turnaround. We just executed our stuff, played good defense. That’s what we need to start doing, and we got a good win.”

Watson performed to the caliber that Miles has always known he’s capable of.

Along with his game-high 29 points, Watson added a team-high nine rebounds, three steals and two assists.

“This is the all-conference Glynn, right?” Miles said. “He did a great job all night. That was important. He was really determined the whole day and (Monday). I don’t think he felt good about watching tape when we watched tape against Michigan State.”

“There wasn’t anything new or different. It’s just Glynn.”

Defensively, Nebraska was stout the entire night, holding a potent Gopher offense to just 32.4 percent shooting from the floor, including a modest 10 points from Jr. F Jordan Murphy, who leads the Big Ten in scoring with 21 points per game.

Murphy, who shoots better than 49 percent on the season, made just 4-of-12 from the field on Tuesday.

“Me and (So. F Isaiah) Roby going into the game were like, ‘We need to really focus and lock in on (Murphy),'” Jr. F Isaac Copeland said. “I think it took all five of us on defense. He’s a good player. We were able to get him into foul trouble early, and kind of throw him off a little bit. He still finished with a double-double I’m pretty sure. He’s a good player, but we did a good job.”

Murphy had a team-best 12 rebounds to go with his 10 points. Sr. G Nate Mason led the Gophers in scoring with 20 points on 5-of-16 shooting.

The Gophers’ 68 points and 32.4 percent shooting success rate were both season-lows. Minnesota came in leading the nation with 8.2 blocks per game, but were out blocked by the Huskers 9-4.

Minnesota trailed by as many as 16 points in the second half, but cut that deficit in half with under a minute to play.

Mental toughness was big for Nebraska down the stretch. Jr. G James Palmer, along with Tshimanga, were issued technical fouls with 4:37 left after a skirmish with Minnesota So. G Amir Coffey, who finished with 17 points.

The Gophers showed fight late, but Nebraska proved worthy of the challenge.

“I think it’s a great boost of confidence going into league play,” Miles said. “We’ve got to do this. If we’re going to fight for it for postseason, this has got to happen. This is an older group of guys, and they know what it takes. I thought tonight’s effort was gritty. It was tough-minded.”

Tough-mindedness has been shown by Nebraska, especially when they play at home. The Huskers are 5-0 at PBA thus far after being just 8-8 there last year, including 3-6 against Big Ten opponents.

“I can’t believe we don’t have a better home court advantage,”Miles said. “We have too many great fans, and such a great situation. This is ridiculous that we’re giving up all of these home games. I know the next one we have here (No. 2 Kansas on Dec. 16), we expect to win. That’s saying a lot, especially against that kind of opponent, but that’s the mentality. There’s no second thoughts.”

Nebraska will next play at Creighton (6-2) on Saturday afternoon at 1:30 p.m. CT. The Bluejays knocked off North Dakota in Omaha 111-68 on Tuesday night.