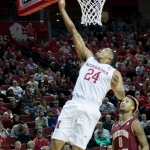 Nebraska went on a six-minute scoring drought in the second half, which allowed Boston College to go on a 9-0 scoring run and disintegrate an 11-point lead to a two-point lead with 14:40 left.

Nebraska fans have seen that movie before, but the ending this time was different.

The defense created eight stops during the drought, and the Huskers (6-2) used a 12-0 scoring run late in the second half to pull away from Boston College (5-3) and win 71-62 on Wednesday night in front of 10,742 fans at Pinnacle Bank Arena.

“It was okay,” head coach Tim Miles said on his team’s effort for the full 40 minutes. “We came out early, and I thought we really played well. We shared the ball, the guys who had open shots stepped up and made them like Jack (McVeigh) and Evan (Taylor) were really important setting the tone.”

“Our guys have worked hard to become a better shooting team and a better three-point defensive team, and those two things happened tonight.”

Sr. G Evan Taylor was 3-for-3 from long distance in the first half, which is the most threes he’s made in a game since coming to Nebraska from Odessa College in Texas in 2016.

“I just credit my teammates,” Taylor said. “A lot of my threes were open looks. I credit them for getting me the ball and having the confidence in me to make shots. I just tried to make shots and help our team get off to a good start.”

“We’re getting better,” Palmer said. “This year, we’ve been putting halves together, but not a full game. Today, (Boston College) made their runs, but we stayed strong. We never lost the lead. It’s just a sign of growth, so hopefully we can grow on that.”

Palmer and Jr. F Isaac Copeland each scored 15 points to lead their team. Taylor had a season-high 13, while Jr. G Glynn Watson had 10.

Miles said Watson felt lightheaded before the game, but fought through it to add three rebounds and six assists without committing any turnovers.

“For him to go out there and get 10 points and six assists with no turnovers was exceptional,” Miles said. “I thought team really played well with only nine turnovers. I think three of those were courtesy of our officials tonight, and it didn’t sound like the crowd agreed with them. I don’t know.”

Jr. F Jack McVeigh, who saw more minutes due to the absence of So. F Isaish Roby (ankle) finished with six points on 2-of-4 shooting from three. Those were only McVeigh’s second and third threes of the season.

Miles said Roby is making progress on his rehab.

“He’s gone from crutches to a boot to being able to walk without a boot, but I don’t think that assures anything for Sunday (Michigan State),” Miles said.

On defense, the Eagles showed Nebraska a few different looks in the second half, which according to Miles, was the main reason for the extended scoring famine.

He credited his team for making the adjustments and never losing control of the game.

“We didn’t adjust to that as well early, and then I thought we made some good adjustments in the second half, and our guys did a better job executing the game plan,” Miles said.

Nebraska never trailed in the game, despite only making three of their first 12 shots to start the second half.

Boston College made only three of their final 13 attempts from the floor.

Jr. G Jerome Robinson led Boston College in scoring with 17 points on 6-of-17 shooting from the floor. So. G Ky Bowman scored 13, and So. F Nik Popvic had 10.

Sr. F Deontae Hawkins, who was the Eagles’ best rebounder and third best scorer, suffered a knee injury late in the first half, and was seen walking on crutches during the second half.

With Boston College out of the way, Nebraska can focus on its schedule over the next two weeks, which can rival that of any other team in the nation.

The Huskers will next play:

“Who wouldn’t want to play against four of the best programs in the country?” Taylor said. “It’s going to be hard, but it’s an opportunity to show the world what Nebraska basketball is and to get better. So, I’m excited and I know our guys are excited. We hope for the best.”

Not much of a Challenge

The Big Ten had a terrible year in the annual Big Ten/ACC Challenge, going 2-11 in a series of games that stretched three days. Nebraska and Purdue, who beat No. 17 Louisville 66-57 on Tuesday, were the only schools in the conference to get a win.

Mike Riley, who was just relieved of his duties as Nebraska’s head football coach four days ago, was in attendance at Pinnacle Bank Arena on Wednesday with his wife Dee.

“I kind of wanted to go up and give him a big high five and a hug,” Miles said. “Coach Riley is a first-class guy. I got a call from Marc Boehm, he said, ‘Hey, do you think you’d have any tickets available on Wednesday?’ I said, ‘Maybe. Depends.’ He goes, ‘Well, Coach Riley and Dee want to come and maybe Billy Devaney.’ I’m like, ‘Absolutely, man.’

“It was really cool. I had talked to (Mike) a few times before everything went down, and he said, ‘You know, I’m going to be around for awhile. I hope to get to some games.’ I’m happy to see him here. He is a man of class and grace and dignity, and it’s good to have that kind of fan with us.”