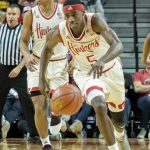 Glynn Watson had a season-high 26 points and six steals to lead four Huskers in double figures, as Nebraska (5-2) earned fifth place in the Advocare Invitational with an 85-80 win over Long Beach State in Orlando on Sunday afternoon.

“This is a good win,” head coach Tim Miles said on the Husker Sports Network post game show. “At the end of the day, we’re where we have to be. If you look at the big picture, the kids have really done a good job and we have to keep finding ways to win. I would have liked to have put this team away, but major college basketball is hard.”

Nebraska lost to UCF 68-59 on Thursday, but beat Marist convincingly 84-59 on Friday.

Nebraska’s defense forced 21 turnovers on Sunday, including 16 steals. Watson’s six steals were the most by a Husker in a single game since 2012.

So. F Isaiah Roby suffered an ankle injury in the first half and did not return. Head coach Tim Miles said afterward it was a “bad sprain” that could keep him out 5-7 days, but it’s not a high sprain or a fracture.

Nebraska returns home this Wednesday to face Boston College in the Big Ten/ACC Challenege. Tip off is set for 8:15 p.m. Pregame coverage on KLIN will start at 7:15.