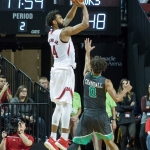 LINCOLN – Jr. F Isaac Copeland got off to a quiet start this season, scoring a combined 21 points in Nebraska’s first three games.

He looked more comfortable with a thunderous 30-point performance on Sunday afternoon, helping the Huskers (3-1) soar past the North Dakota Fighting Hawks (2-2), 92-70 in front of 10,249 fans at Pinnacle Bank Arena.

Copeland found his stroke early and stayed with it, sinking an impressive 12-of-14 baskets while also grabbing a team-high eight rebounds.

He was 3-of-4 from the three point line after starting the season 0-of-8 from that range.

“It felt good,” Copeland said. “I have a good support system around me. My Dad (Ike) calls me pretty much daily to let me know to keep working and stay positive, and it’s eventually going to happen. I didn’t expect to get 30 points, but I’ll take it.”

Copeland’s support system on the floor Sunday was also encouraging. Sr. G Anton Gill, who missed the first two games of the season with knee and groin injuries, dumped in a career-high 16 points off the bench on a solid 6-of-9 shooting night, including hitting 4-of-5 from long range.

He had eight total threes in the 12 games he played in last year.

“Honestly, I’m just glad to be back playing,” Gill said. “After the groin (injury) and everything. All of this just feels great to be back doing something that I love. Just to be back out there with my guys means everything to me.”

Gill got cleared right before this season began, but missing the first two games may have been the best thing for him.

“I just had to get my legs back under me,” Gill said. “I had a lot of fatigue and stuff like that. I think missing those first two games was probably the best thing to happen for me. My legs feel great, I feel bouncy again, and now I feel like I’m getting back to myself.”

Copeland (back) and Gill (knee) both had major surgeries in the offseason. Both returned to practice before the season started, but head coach Tim Miles didn’t know how soon it would be until those two could produce at a high level and feel like themselves.

He only had to wait until the fourth game.

“I’m just so happy for them,” Miles said. “Two guys that go through major surgeries, and to see them just really explode, I’m just so happy for them, because I know what a relief it is and how exciting it is for them. They deserve it. They’ve worked everyday. They’ve struggled without any groaning and griping. They just stayed with it. Hopefully, this is the start of the beginning, right?”

It was just as much a relief for Miles as it was for Copeland and Gill.

“It was a relief. Kent Pavelka asked me, he said, ‘is this what you hoped this team can be? Maybe Glynn (Watson) or James (Palmer) doesn’t have a great night, but the other guys pick up?’ I said, ‘This is what this team has to be. It’s what we haven’t had, and that’s what the depth is that we’ve talked about all year, because the depth has quality and can make plays.”

Nebraska’s offense was a lot more bouncy on Sunday than it was on Thursday at St. John’s.

The Huskers shot just 28.1 percent from the floor at Carnesecca Arena on Thursday, but shot 52.9 percent on their home floor Sunday.

Nebraska also had 20 assists against North Dakota after only managing nine against St. John’s.

“That was big,” So. F Isaiah Roby said. “(North Dakota) is similar to St. John’s. They had a lot of guards, they played four guards and they all drove to the rim. The fact that we could show that we made improvements on just one day of practice already is good for us. Offensively, we knew that was going to come. We have a lot of talent, and it helps to get stops. It helps your offense already to get your defense going.”

Roby tied his season-high with 11 points. He also had four assists and four rebounds.

Jr. G Glynn Watson was the fourth Husker in double figures, scoring 13 points on 6-of-12 shooting. Watson also had five rebounds, three assists and a steal.

Jr. F Conner Avants, who shot a team-best 60 percent from the floor in the Fighting Hawks first three games, had a season-high 16 points to lead North Dakota.

Nebraska then went on a 20-9 run to secure the comfortable win.

“(North Dakota) is an athletic team,” Miles said. “(Head coach Brian Jones) has got drivers, shooters. (Sr. G) Evan Taylor did a tremendous job on (guarding) Crandall in the first half. I don’t think people realize how tough he is to guard one-on-one.”

“I thought we were solid defensively. To hold (North Dakota) to 70 is not that easy when they average 48 (points) in the second half in their first three games.”

Taylor held Crandall to just two points in the first half, while scoring eight points and grabbing four rebounds himself.

A balanced and effective offensive attack might just be what Nebraska needed to get back on track.

“Eventually you figure, there’s going to be a return to a mean,” Miles said,” and we’re going to be okay. But at the same time, you don’t know. I’m really happy for those two guys (Copeland and Gill) to bust out and I’m looking forward to other guys getting a better rhythm and our whole operation getting better.”

Nebraska will next take on Central Florida (UCF) on Thursday in the Advocare Invitational tournament in Orlando, FL. Tip off is set for 5 p.m. central. The game can be viewed on ESPN3.

>> Fr. G Thomas Allen (tail bone) did not play Sunday. He scored three points in ten minutes on Thursday. Miles said he tried to practice Saturday, and didn’t practice well. He won’t practice Monday, either. Miles said they’ll see if they can get him ready for Orlando.

>> St. John’s, who brutalized Nebraska 79-56 on Thursday, is in the same Advocare Invitational as Nebraska, but on the opposite side of the bracket.

“Best thing in the world would be to get another crack at those guys down in Orlando,” Miles said.