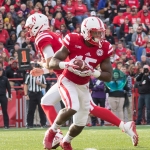 Saquon Barkley ran untouched 65 yards for a touchdown just 57 seconds into the game. Nebraska fell behind by 32 points at halftime. It would have been easy for any team throw up the white flag. Or throw in the towel. Quit.

Tanner Lee, whose status was in doubt for most of the week due to concussion, completed 26-of-41 passes for 399 yards and three touchdowns.

Stanley Morgan made several highlight reel catches, finishing with seven grabs for a career-high 185 yards and a touchdown.

J.D. Spielman was once agin the reliable target he’s been all season, ending his day with six catches for 96 yards.

The game ended on a three-yard touchdown pass to RFr. TE Jack Stoll, only the second TD of his young career.

The final score didn’t accurately depict how close the game was.

“We just got off to a horrible start in the game and Penn State was real good,” head coach Mike Riley said after it was all done. “(Barkley) made a big run early, which set us off in a bad way. It got out of hand like that right off the bat.”

After Barkley’s touchdown, the Huskers went three-and-out on their first offensive possession, but a fumble by Penn State punt returner Zech McPhearson put the Huskers at the Penn State 34-yard line. Collin Miller recovered the fumble.

Nebraska was only able to get a field goal off the turnover, trailing 7-3 with 9:18 left in the first quarter.

After a Penn State three-and-out on the ensuing drive, Nebraska took advantage of another special teams mistake; this time an 18-yard punt by Blake Gillikin. The Huskers took over at the Penn State 36.

Devine Ozigbo scored on a one-yard touchdown run three plays later to give Nebraska a 14-10 lead with 6:17 to go in the first quarter.

It was Nebraska’s first time leading since the fourth quarter of the Northwestern game on Nov. 4.

It didn’t last. The Nittany Lions blasted the Huskers with 35 unanswered points to take a 42-10 halftime lead.

42 points were the most scored against Nebraska in a first half since a 62-28 loss to Oklahoma in 2008. The Sooners had 49 at halftime of that game.

In the second quarter of Saturday’s game, Nebraska had just three yards of offense on 12 plays. All four of the Huskers’ drives in that quarter were three-and-outs.

“Man, I’m just sorry for these kids,” Riley said. ‘We’re just a time away I think, you know. I sure like them. There was a glimmer of some better football as we went on.”

“I think it’s just growth together of doing what we’re doing,” Riley said. “I’ve thought about this obviously a lot, what this must look like in year three. In kind of rationalizing it to myself, it’s really year one with some youthful players in it, but I think this could be a good group.”

Riley’s group showed the glimmer of better play when they came out of the locker room outscoring Penn State 34-14 in the second half. After only 77 yards in the first half, the Huskers rallied for 389 in the second.

The Nittany Lions scored two more touchdowns in the fourth quarter to squash any hopes of a comeback.

Barkley had more rushing touchdowns against Nebraska than he did against any other team Penn State has faced this season.

“I’d heard of him,” Riley said. “He’s exciting. He’s really exciting. It’s pretty impressive seeing him right up close and personal. His true explosion. You can see his passion for the game as he plays. It’s pretty special. This guy is a unique guy, and carries himself like one of those unique guys.”

QB Trace McSorley was also on point, completing 24-of-36 passes for 325 yards and three touchdowns. He also scrambled for 46 yards and a touchdown.

“(McSorley) was a big, big factor in the first half in particular,” Riley said.

Nebraska’s fate in the 2017 season is all but sealed. With Scott Frost rumors heating up by the hour, Coach Riley was asked about his own future at the end of his post game press conference.

“Bill (Moos) and I have talked a couple of times one-on-one since he’s been the athletic director,” Riley said. ” I’ve known Bill for a long time. I’ve appreciated those talks…we’re just going to keep doing what we do and go forward and that decision is going to be made by somebody other than me.”

>> Stanley Morgan’s 185 receiving yards were the second most by any receiver in a single game in program history. J.D. Spielman holds the record with his 200-yard performance against Ohio State on Oct. 14 earlier this year.

>> Nebraska has given 50+ points in back-to-back weeks; something that hasn’t happened since 1945.

>> Tanner Lee has passed for 2,938 yards this season; the most ever by a first-year starting QB at Nebraska.

>> At 4-7, Nebraska has disqualified itself from bowl eligibility. 2017 will mark only the third season in 48 years where the Huskers won’t play a game beyond the regular season.