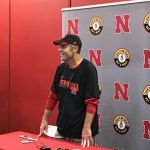 Nebraska head football coach Mike Riley spoke following Thursday’s practice at the Hawks Championship Center to update injuries and the overall status of the team before they depart for Purdue in West Lafayette, IN on Friday.

With Gifford and Furgeson both unavailable at outside linebacker, senior Marcus Newby will start at OLB along with redshirt freshman Ben Stille.

Newby’s top backup for Saturday will be sophomore and Loveland, CO native Jacob Weinmaster. Weinmaster is a walk-on who hasn’t played outside of special teams this season. He missed the 2016 season with injury.

Junior linebacker Dedrick Young, who broke a bone in his left wrist earlier this season, had a surgery during the bye week to fix the bone. Young will still wear a cast, but he has been cleared to play.

Offensive coordinator Danny Langsdorf said Monday that redshirt freshman Matt Farniok had move from tackle to guard on the offensive line, and was pushing junior Tanner Farmer for the starting right guard spot. Head coach Mike Riley confirmed Thursday that Farmer will start at RG, but Farniok is fully ready to go if needed.

Sophomore running back Tre Bryant underwent knee surgery on Tuesday, and Coach Riley everything went “clean” with the surgery, and the goal is to now get Bryant back healthy for the start of spring football in March.

From family, to teammates, to coaches/trainers.. Thank you for all the prayers and hospital visits! #FarFromOver pic.twitter.com/zUHmCw8sHw

Nebraska’s secondary will be about the healthiest they’ve ever been collectively going into Purdue on Saturday. Aaron Williams, Josh Kalu and Antonio Reed, who all missed the Ohio State game, are back and ready to play. Chris Jones, Eric Lee and Lamar Jackson are all ready to go at cornerback.

“I’m excited, finally, to see that picture (defensively) that we anticipated on the very first day of the season,” Riley said.”

The spirit and will power of the team has consistently been a question this season, especially following tough losses like Ohio State and Wisconsin. Coach Riley’s opinion on the team’s energy and enthusiasm is unwavering.

“I really liked the whole week (of practice) of how this thing has looked,” Riley said. “I thought in the off week, that the practices were really good and enthusiastic. I was really impressed with the spirit and attitude. I thought it was almost cathartic. It was a release of just getting to play without a game right in front of them.

These are good kids. They’ve grown in a lot of ways. We just have to continue to grow the football part of it and win.”

The team had a chance to meet with Nebraska athletic director Bill Moos on Thursday morning. Nebraska’s Associate Athletic Director for Football Administration Dave Van De Riet gave Moos a tour of the facilities and introduced him to the team and the coaching staff.

“I thought that was good,” Riley said.