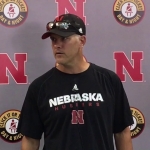 Nebraska used a bye week last week to heal up and evaluate how they can save their season with five games remaining. Offensive coordinator Danny Langsdorf was pleased with what was accomplished during practice last week when they weren’t preparing for a game.

“We’ve had a lot of good work from last week up until today,” Langsdorf said. “Really working hard in protection and runs and completions. We had a lot of really good detailed work, I thought, last week without a game kind of looming we were able to go back on some things and fine tune some runs and some patterns.”

In the last three games, quarterback Tanner Lee has completed 60 percent (63-of-106) of his passes while throwing for 869 yards, seven touchdowns and just one interception. Langsdorf credits his recent improvement to simply being more comfortable with running the offense.

“I think he is doing a really good job of seeing the field and not trying to do too much,” Langsdorf said. “Not trying to force the ball into tight windows. (He’s doing) a better job of recognizing coverage, and just being more comfortable in what we’re doing.”

Lee said during Monday’s press conference his coaches’ leadership and teaching has fueled his recent confidence.

“I think I just continue to listen to my coaches,” Lee said, “and just try to focus on doing what they ask me to do. I think just maintaining my confidence and just believing in myself. Just kind of feeding off of the support of my teammates and things like that has allowed me to keep playing, so I’ll just continue to do that.”

Head coach Mike Riley said Monday morning that the tight ends haven’t been as involved in the receiving game as much as he’d like them to be. Langsdorf says rotating someone like redshirt freshman Jack Stoll, and running plays designated for senior starters Connor Ketter and Tyler Hoppes could help improve their receiving numbers.

“Stoll being in there in a rotation, I think, is a good thing to help keep (Hoppes and Ketter) fresh and ready to win on some one-on-one matchups,” Langsdorf said. “There hasn’t been a lot of (tight end) production lately, and we’re really trying to work toward featuring (tight ends) more and more and take some pressure off of the receivers.”

Hoppes has 14 catches for 151 yards and one touchdown this season. Stoll is the only other tight end with a catch this season. He has just one for 12 yards.

“Giving (Bradley) more work, getting him more and more different plays that he’s comfortable with,” Langsdorf said. “We don’t want overload him since he’s a true freshman, but I think he is deserving of some more work with Tre’s situation being what it is. He’s shown some signs of being a talented runner, an all around player, and a receiver out of the backfield. He’s tough, and he blocks well.”

Bradley only has seven carries for 23 yards.

Redshirt freshman Matt Farniok hasn’t played since the Northern Illinois game on Sept. 16 due to a wrist injury, but has practiced almost every day since with a large, club-like cast on his left wrist.

Riley, Langsdorf and offensive line coach Mike Cavanaugh all said Monday that Farniok has been working out with junior Tanner Farmer at the right guard spot.

“I think (guard) is his most natural position,” Langsdorf said. “Just depth wise, we’ve needed some bodies at tackle with (true freshman Brenden) Jaimes coming along and (senior David) Knevel being in that tackle spot, (junior Nick) Gates, and (sophomore Christian) Gaylord (also at tackle), I think it was easy to move Farniok inside, and feel like that’s probably his best position.

Langsdorf said they have not decided whether Farmer or Farniok will start at right tackle for Staurday’s game at Purdue.

Junior receivers Keyan Williams (hamstring) and Bryan Reimers (ankle) both practiced Monday and are “working their way back,” according to Langsdorf. There’s no exact timetable on their return.