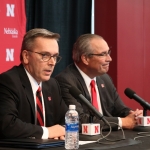 By Tommy Rezac and Brent Martin

Bill Moos started as an athletic director at the Division I level in 1990.

In his 25 years of experience, he’s always carried with him one motto.

“Honor the past, live the present, create the future,” Moos told reporters at Memorial Stadium on Sunday afternoon during his introductory press conference.

Moos has been Washington State’s athletic director since 2010. He begins his tenure as Nebraska’s A.D. on Oct. 23.

In his time with Cougar athletics, Moos secured a 10-year, $35 million marketing rights agreement with IMG College and led a $130 million addition and remodel of WSU’s Martin Stadium.

He was also dean of Pac-12 athletic directors, where he helped secure the conference’s 12-year, $3 billion TV contract with FOX and ESPN.

He previously worked as Oregon’s athletic director from 1995-2007, where he oversaw 13 Pac-10 championships in six different sports and rose annual fundraising by roughly $21.5 million.

He took time off in 2007 to start up a cattle ranch with his wife, Kendra, near Valleyford, WA. They moved to Pullman in 2010 when Bill was asked to lead Washington State’s athletic program.

He just couldn’t stay away from the profession.

“I missed the competition,” Moos said. “Any of us who actually played the game, especially in the collegiate level, your pilot light never goes out and it’s begging for fuel and getting that adrenaline up. On game day, there’s no greater thrill.”

“I tried that retirement stuff, and Kendra, after two years said, ‘You need a job.’ Yeah, better get back at it. We did, and we plan to be in this for a long, long time still.”

Green emphasized how important finding the right fit for the position was Sunday, noting it was “so apparent” that Moos was Nebraska’s man.

Moos grew up in rural east Washington on a wheat and cattle ranch, listening to Nebraska vs. Oklahoma on the radio every season as a young boy. He believes that background could make him a solid fit culturally.

“I’m a rural boy,” Moos said. “I feel like eastern Washington is so much like the state of Nebraska. Good, wholesome people with a great work ethic. Down to Earth, love athletics, and really love football.”

Green said Kendra and Bill Moos are like “Nebraskans who have lived somewhere else for all of their life.”

From a competitive standpoint, Moos is determined to once again make Nebraska “the hunted” in all sports, but especially football.

“We need to get back into that position where everybody’s putting Nebraska (on the schedule) and circling it,” Moos said, “and that’s going to be one tough game, whether (the opponent) is going to Lincoln, or whether they’re coming to our place.”

“We need to compete in all of our sports. I’m a fierce competitor. We should be in a position in every sport to compete for championships, and certainly that’s going to be our goal, and that will be a big part of the blue print that I referred to.”

Moos has made a blue print at every previous school he’s been to that illustrates where he and his staff envision the goals of the athletic department, and how those goals will be carried out.

“Everybody internally will have ownership in that,” Moos said.

That includes, for the time being, Nebraska head football coach Mike Riley, whose job status remains shaky after Nebraska’s 56-14 meltdown against Ohio State in Lincoln on Saturday night.

One thing is for certain: if Riley is let go, it won’t be until the end of the 2017 season.

“I don’t think anything is really accomplished, and I never have, of dismissing a coach during the season,” Moos said to media following his press conference. “Because of distractions, a lack of focus. It can be done soon afterwards, but you better have a plan in place as to where you’re going.”

Moos and Riley, only meeting briefly Sunday, are not strangers to one another. They were in the Pac-10 (now Pac-12) at the same time for a combined 12 years.

The two haven’t talked much, Moos said, since Riley took the job in Lincoln in December 2014, but the familiarity with one another should make for productive and fair discussions.

“I did respect (Riley) and the job he did (at Oregon State),” Moos said. “I was surprised when he left to come to (Nebraska), but I thought that he should do very, very well. As we speak right now, he’s my football coach, and I’m going to support him.”

Riley released a brief statement on Moos’ hire Sunday afternoon. He was not available for comment at Memorial Stadium.

Another meeting Moos is looking forward to in the coming days is one with former head football coach Tom Osborne, who was one of 20 people on a search committee made up of current and former student-athletes and coaches that helped with the three-week-long search.

Senior middle blocker Briana Holman from the Nebraska volleyball team was one of the current student-athletes involved in the committee.

Green called Moos in a written statement “a program-builder who forges enduring relationships with coaches, student-athletes, staff, supporters and fans.”

“I was pleased that (Moos) was interested,” NU President Hank Bounds said Sunday. “I just can’t express how excited I am that Bill Moos is our athletic director. He is really good.”

Moos, 66, agreed to a five-year contract with a base annual salary of $1 million. The contract includes annual incentives up to $500,000.

Moos and his wife Kendra have three daughters, Christa, Brittany and Kaiti; and two sons, Bo and Benjamin.