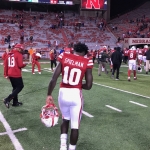 Many of those fans had left by halftime or sooner.

“Not a great feeling, you know,” senior linebacker Chris Weber said when asked about seeing empty seats at the start of the second half.

Nebraska got to the point of being down very early.

The Huskers went three-and-out on their first two possessions, while the Buckeyes had two nine-play drives to start the game that each went for a touchdown.

Ohio State scored on each of its next three drives to take a 35-0 halftime lead. Nebraska hadn’t faced a halftime deficit that large since Oct. 13, 2007 when Oklahoma State led 38-0 in Bill Callahan’s final season as Nebraska’s head coach.

The Buckeyes dominated offensively with 633 total yards compared to just 393 by Nebraska.

Head coach Mike Riley views Saturday’s game as a reality check on how far away the program is from competing with top teams like Ohio State, whom he called “the gold standard” of the Big Ten earlier in the week.

“It certainly does paint a picture of where you have to go if you really want to do what everyone wants to do here,” Riley said. “That’s what’s going to have to happen. The competition with (Ohio State), those players…that’s the realism of it. So, it’s a measuring stick.”

The Buckeyes scored on eight consecutive offensive possessions, each of then directed by quarterback J.T. Barrett.

The fifth-year senior had video game-like numbers, completing 27-of-33 passes for 325 yards and five touchdowns. He also ran ten times for 55 yards and two more scores.

Nebraska’s Tanner Lee was one bright spot for the Huskers on offense, going 23-of-28 for a career-high 303 yards and two touchdowns.

Nebraska’s only two scores both came in the 3rd quarter. Lee hit redshirt freshman receiver J.D. Spielman for a 77-yard touchdown on the Huskers’ first offensive possession of the second half.

The other was a 17-yard pass to junior receiver Stanley Morgan, Jr. with 5:52 to go in the third quarter.

“We wanted to score and get stops and do our best to make it a game,” Lee said. “Those were good, positive takeaways from this.”

Spielman finished with a career-high 11 catches and a new school record for most receiving yards in a single game with an even 200.

“He continues to get open and make tough catches and run after the catch,” Lee said. “He’ll continue to do that.”

Other than Lee connecting with Spielman, it’s hard to find any other positives Nebraska can take away from their latest defeat. The short-term objective now becomes picking up the pieces, putting the loss in the rear view, and regrouping during the upcoming bye week.

“The actual goal is to win all of the games, but as you go, you would like to think you’re getting better through the year playing your best ball as you go,” Riley said. “I know (the Ohio State loss) didn’t look like that, but I do think there are parts and individuals that are. This is what I like about our profession; this is where all of the teaching part comes in.”

Weber sees the upcoming week as a chance for the team to heal and find strength for the season’s final five-game stretch.

“(I think the bye week will be good) for us to get healthy, not only to get healthy physically but mentally, to kind of get rejuvenated for the second half of the season,” Weber said, “to finish strong because I feel like that’s something we can do.”

After a week off next Saturday, Nebraska goes on the road to take on Purdue (3-3, 1-2 Big Ten) at Ross-Ade Stadium in West Lafayette, IN. Kickoff time for that game has yet to be announced.