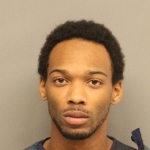 A police surveillance leads to the latest arrest of a bank robbery suspect.

Police Chief Jeff Bliemeister says 21 year old Israel Holmes was apprehended Tuesday by an investigator who was outside Lincoln federal Savings on south 48th when it was robbed because of the special surveillance.  Bliemeister says the citywide bank surveillance project is meant to prevent heists and catch robbers.