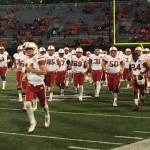 The Nebraska Football team (3-2 overall, 2-0 Big Ten) kept critics, and potential firings, at bay for at least another week.

The Huskers scored a comfortable 28-6 win over the Illinois Fighting Illini (2-2 overall, 0-1 Big Ten) on Friday night in front of 43,058 fans at Memorial Stadium in Champaign, IL.

“Win on the road. I’m proud of our kids,” Riley said. “We didn’t make much of it a big deal being a short week but it was good.”

The Husker defense was once again dominant, holding the Illini to just 199 yards of total offense.

Nebraska has held its last three opponents to less than 250 yards of offense, which hasn’t happened since 2003. The six points are the fewest allowed in a road win by the Huskers since a 2006 win at Kansas State, and the fewest points given up in the Mike Riley era overall.

“I thought the defense held up all night long, Riley said. “Illinois had some nice-looking drives, nice-looking plays, but our ability to keep them out of the end zone was just beautiful. It was really good football.”

Offensively, Nebraska finished with 411 total yards, thanks in large part to an efficient night from junior quarterback Tanner Lee, who completed 17 of 24 passes for 246 yards and three touchdowns.

Lee finished a game interception-free for the first time since the Arkansas State game.

“I think it was just a good game plan,” Lee said. “I think we had a great feel for what they were going to show and we were extremely well prepared.”

Nebraska started the scoring early on its first drive. Senior receiver De’Mornay Pierson-El hauled in a pass from 45 yards out to give Nebraska a 7-0 lead with 8:57 left in the first quarter after an eight-play, 80-yard drive.

Pierson-El finished with four catches for 94 yards and a score.

The Illini responded with a 15-play, 65-yard drive on their ensuing possession. The drive ended with a 24-yard field goal from junior kicker Chase McLaughlin, making the score 7-3 Nebraska with 14:57 left in the first half.

Illinois held the ball for 11:52 of the first quarter.

The Huskers got right back to work on their first drive of the second quarter. Lee went 5-for-5 for 52 yards on what was an eight-play, 75-yard march capped off by a 14-yard touchdown run by junior running back Devine Ozigbo.

It was Ozigbo’s first touchdown of the season and seventh of his career. He got his first-career score at Illinois in 2015.

Ozigbo finished the game with 18 carries for 106 yards along with the score. He’s now rushed for over 100 yards the last two weeks.

After another defensive stop, Nebraska’s offense kept churning along with a nine-play, 89 yard drive that ended with a six-yard touchdown catch by senior tight end Tyler Hoppes, which led Nebraska to a 21-3 halftime lead.

The touchdown was the first of Hoppes’ career.

Lee finished the first half completing 11-of-13 throws for 167 yards and two touchdowns. He was 9-for-9 with 110 yards in the second quarter alone.

The Huskers got the ball to start the second half, but the Illini defense forced its first three-and-out of the game. Illinois’ offense responded with a 12-play, 46-yard drive that ended with a 25-yard field goal by McLaughlin.

Nebraska led 21-6 with 7:49 left in the third quarter, but Ozigbo fumbled on Nebraska’s first play of the ensuing drive. The ball was recovered by sophomore safety Stanley Green at the Nebraska 32.

The Blackshirts held their ground, and pushed the Illini out of field goal range thanks to a 12-yard sack by sophomore defensive end Carlos Davis.

Nebraska started its next drive at its own seven-yard line, and drove 93 yards to the end zone on 14 plays. Junior wide receiver Stanley Morgan, Jr. hauled in a 23-yard touchdown pass to give Nebraska a 28-6 lead with 13:34 left in the game.

Morgan, missing last week’s game with a soft tissue neck injury, finished Friday with a team-high eight catches for 96 yards and a touchdown.

“I was just fighting,” Morgan said. “I just dug through. Dug through the pain.”

Illinois had no response, achieving only 14 yards in the 4th quarter. The Huskers ran the ball 10 times for 53 yards in the final 6:54 of the game to run out the clock.

“I really think it was kind of a balanced football game,” Riley said. “Offense, defense, whatever the special teams’ role was in it. I thought it was probably the most overall balanced game that we’ve had. If you could put it together where talk about rushing production and passing efficiency, it was more of a picture of what we’d like to say is us.”

Nebraska is back home next Saturday for a marquee match up against No. 10 Wisconsin. Kickoff from Memorial Stadium is set for 7 p.m.