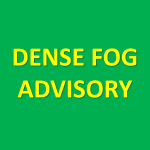 …DENSE FOG ADVISORY IN EFFECT UNTIL 7 AM CST TUESDAY… *

Visibility one quarter mile or less in dense fog is in effect for portions of east central, northeast and southeast Nebraska and southwest and west central Iowa.

If driving, slow down, use your headlights, and leave plenty of distance ahead of you.

The advisory includes the following cities in Nebraska and Iowa: