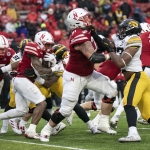 Through most of the first half, only a small section of the crowd was having what would be considered a great time. That would be the sections wearing gold with the logo of a bird on their hats.

Their good mood could be attributed to the 14-3 lead that Iowa(9-3, 6-3 Big Ten) had after the first quarter, or the 24-10 lead at the half. All three of their touchdowns came from at least 45 yards out, including a 45 yard Ihmir Smith-Marsette run, a 55 yard Tyler Goodson run, and a 95 yard kickoff return touchdown by Smith-Marsette. The kickoff return only happened because Nate Stanley threw an interception to Cam Taylor-Britt who returned that for Nebraska’s only touchdown in the first half.

The Huskers were held to just 114 yards in the first half and had already punted five times. The Blackshirts had given up up 163 yards on the ground alone.

“Our edge lost contain on the reverse,” said coach Scott Frost. “That can’t happen. We had an assignment error. We got cutout on the backside of another one for another long run. We missed a tackle on another one.

Then, in a fashion not typical of the 2019 season, Nebraska(5-7, 3-6 Big Ten) came out of the locker room a changed team, and the majority of the 89,000 in attendance became the group having a good time.

Nebraska ran off a 10 play drive before punting, but the first of four straight three and outs gave the Huskers the ball on their own 41. Three plays later, JD Spielman was catching a Luke McCaffrey pass for a 39 yard touchdown.

After another three and out gave Nebraska the ball on their own 40, a double digit play drive would be needed. The Huskers burned nearly six minutes of clock on 13 plays, capped off by a Wyatt Mazour 9 yard touchdown run. After looking like the top could come off at any moment in the first half, the game was tied at 24 through three quarters.

Following the Mazour touchdown, the two teams combined for six punts in a row. That left Iowa the ball with 3:14 remaining in the game on their own 37. Two plays later, Nebraska had the ball courtesy of a fumble.

Now with the ball, momentum, three timeouts, and 2:32 left in the game, Nebraska began the drive at their own 39. A Mazour run for eight yards started the drive well. On second down, it was an Adrian Martinez run for six yards and a first down. Another Mazour run up the middle only picked up a yard, but then things got interesting.

McCaffrey entered the game at quarterback, as as both he and Noah Vedral did in the first half for certain play packages.

“We had a package for Noah [Vedral], and we had a little package for Luke,” said Frost. “With the runner that Luke is, we figured a team might come running up to stop his run and give us a big play, and it happened. We kind of had the same thing set up for Noah. That one didn’t work. The one with Luke did. There at the end, we are just trying to get the best play call.”

McCaffrey rolled to his left but did not find anyone open downfield, so he scrambled and picked up four yards. Except, during the scramble an illegal block was called, pushing Nebraska back 15 yards. That penalty would be the killer for the drive, with the next two plays only picking up a total of five yards.

Isaac Armstrong’s tenth punt of the game set Iowa up on their own 26 yardline with just 32 seconds left in the game. Iowa would only need 31 of those.

Stanley would throw over the top each play, completing two of them for 22 yards each to get the Hawkeyes to the Nebraska 30. Iowa clocked the ball with six seconds remaining, setting up a last second field goal.

Despite Frost using both of his final timeouts, Keith Duncan knocked through the 48 yard field goal to give Iowa the 27-24 lead. A squib kick that ran out the clock would give the Hawkeyes their fifth straight win over the Huskers.

Dedrick Mills had another big day, carrying the ball 24 times for 102 yards. Mills also led the team with four catches for 34 yards on a day where Nebraska only managed 100 yards through the air.

Martinez was 10-for-18 passing for 50 yards and an interception, while adding 63 yards on 21 carries.

At five wins, the chances of making a bowl game were slim coming into the day, and it looks to be the third season in a row without a bowl appearance. This is the most consecutive bowl misses since the years prior to Bob Devaney becoming the coach.

“We certainly would have liked to get our young guys more practices,” said Frost. “That said, it doesn’t seem like it right now, coming off this game, but I know how much ground we’ve covered already.There’s a lot of things that needed to get fixed, and I think a lot of those have been addressed.

“I think when you plant a seed, you don’t necessarily see sprouts right away. There’s a lot going on underneath the ground before you see things shooting out of it. I know a lot of things have gotten better. We still have a lot of work to do.”