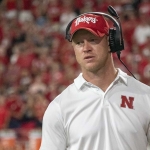 There was a familiar script in play Saturday in West Lafayette.

Nebraska raced out to a lead. Defense and special teams were playing well. Then no knockout punch.

We saw it against Colorado, giving up 24 points in the fourth quarter before falling in overtime. We saw it last week against Indiana, where Nebraska was up 14-3 in the first quarter before the Hoosier offense really started to make the Blackshirts pay through the air. And we saw it today at Purdue.

“The defense played well enough to have the game put away in the first half and the offense didn’t play well. Special teams made a couple plays at times and couple other times we didn’t. We gotta get to a point where all three phases are playing well. That’s on the coaches. That’s on me. That’s on the players. It’s everybody. These are games we should win,” said head coach Scott Frost.

Nebraska was on the board first with captain and first string quarterback Adrian Martinez back on the field.

“I felt good. I was excited to be back out there,” Martinez said, adding he was “100-percent” for this one.

Dedrick Mills capped off an eight play, 51 yard drive with a one yard touchdown run. The Huskers would add a field goal a couple of drives later after being set up first and goal from the two yard line courtesy of a Darrion Daniels interception. It was Daniels’ first career interception and the first by a Nebraska lineman this season.

Nebraska’s next two drives would start at the 46 and 47 yard lines of Purdue. The first ended with an Adrian Martinez interception into double coverage, where two other targets were open. The second ended in a punt after just three plays with a net of zero yards.

That would be where Purdue began to take advantage.

The Boilermakers scored on the ensuing possession, a ten play, 89 yard drive. After Nebraska was forced to punt again while in Purdue territory, Isaac Armstrong and company downed Purdue at their own four. 12 plays later is was Purdue leading 14-10.

Nebraska ran out the final 14 seconds of the half.

Coming into the game, Purdue was last in the Big Ten in rushing yards per game with 68. At the half, they held the advantage on the ground over Nebraska 86-79.

The second half would start with momentum for the Huskers. Nebraska forced a three and out then went 72 yards in 11 plays to add a field goal from Barret Pickering and trail just 14-13.

The next Purdue drive would also end in a punt, but this one was blocked by Eric Lee Jr., setting up Nebraska on the Boilermaker 34. No points would be scored as the offense elected to go for it on fourth and six from the 30 but the pass was incomplete. A field goal attempt from that spot would have tied Pickering’s career long.

The game then turned into a shootout.

After Purdue made a field goal on their next possession to lead 17-13, the teams exchanged touchdowns, and the lead, until Nebraska was out in front 27-24 courtesy of the second rushing touchdown of the game for Martinez with 4:21 left in the game.

Purdue started the possession on their own 18 yard line. They ran seven plays to get the ball to midfield, before a 26 yard pass from Aidan O’Connell to Brycen Hopkins, setting the team up in field goal range.

O’Connell, the third string quarterback, had entered the game on the last drive after Jack Plummer left with an injury. Head Coach Jeff Brohm said Plummer will likely miss the remainder of the season.

Set up at the Nebraska 27, Purdue would use short runs by Doerue and a pass to Hopkins to end up with a third and five at the Nebraska nine yard line. Coming out of a timeout by both teams, David Bell would take a reverse untouched into the end zone.

The drive started at the Nebraska 20 with 1:08 remaining. Back to back incomplete passes would give the Huskers a third and 10. Martinez hooked up with Kanawai Noa for seven yards, but the clock was ticking.

With one timeout left, and freshman sensation Wan’Dale Robinson not on the field, the pass from Martinez to Spielman was tipped and Nebraska would turn the ball over on downs for Purdue to run out the final 26 seconds.

“(Robinson) was saying he was available and the trainer said he wasn’t,” Frost explained as the reasoning for one of his top offensive weapons not in the game on final series.

The result drops Nebraska to 4-5 and boosts Purdue to 3-6.

A week after giving up 351 yards through the air to Indiana’s backup quarterback, Purdue’s second and third string quarterbacks combined to to 31-41 for 304 yards. Purdue added 145 yards on the ground on 36 attempts.

Nebraska, meanwhile, threw the ball 39 times, completing 22 of them for 247 yards. The rushing attack wasn’t able to get rolling, though. The Huskers ran 35 times for 128 yards in the game.

Frost said after the game, “I told (the team) I think the last two games are games that we easily could have won and we didn’t for a lot of reasons.”

Nebraska still needs to win two of the final three games for bowl eligibility. The Huskers are off next week then close out the season hosting 6-2 Wisconsin, going to 3-6 Maryland, and hosting 6-2 Iowa on Black Friday.

·         With the loss, the all-time series between the schools is now tied at 4-4, with Nebraska holding a 4-3 edge since the Huskers joined the Big Ten.

·         Spielman has caught a pass in 30 straight games, the fifth-longest streak in school history. Spielman has at least two catches in 29 of those 30 games.

·         Nebraska had blocked punts by Eli Sullivan and Eric Lee Jr. in today’s game. This marks the first time Nebraska has blocked two punts in a game since having two blocked punts against USC in the 2014 Holiday Bowl.