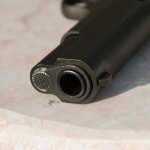 Melody Vaccaro tells KLIN News that it is “taking a step backward.”  She claims that the approved ordinance is far less effective then Roy Christensen’s original proposal requiring that guns be in locked containers inside vehicles.  Vaccaro says now guns just have to be hidden under a blanket in locked cars.

Vaccaro says the ordinance doesn’t address the growing problem of teenagers stealing guns out of cars in Lincoln.