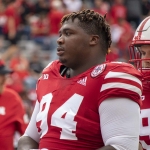 Nebraska senior defensive tackle Khalil Davis won’t be playing against Northwestern. The Big Ten announces today that Davis is suspended for striking a player during the first quarter on the Nebraska-Ohio State game. The release says the act violated the Big Tens sportsmanship policy…which includes civility toward all, and respect, particularly toward opponents and officials.

There was not a penalty called on the play, and the ABC telecast cameras did not capture the incident that brought about the suspension.

KLIN’s Jack Mitchell says that Davis, a senior, is Nebraska’s sacks leader this year and his suspension will likely mean additional playing time for Ben Stille and Deontre Thomas.

Husker Head Coach Scott Frost says they have been in communication with the Big Ten Conference Office over the past day regarding Khalil Davis, and support the Big Ten’s disciplinary action. Frost says they do not condone unsportsmanlike play , and will use this as an educational opportunity with the team on how to play the game the right way. Frost says they are moving forward with our preparation for Saturday’s game with Northwestern.”