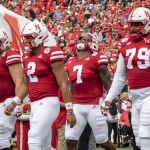 After beginning last season 0-6, Nebraska will take a win to kickoff their 2019 campaign. However, NU’s offense got shutout in the second half in a bizarre season opener that at times, was too close for comfort for the Huskers. Nebraska did hold on for the victory though, defeating South Alabama 35 to 21.

“Anytime you can get a win, it’s a good thing,” head coach Scott Frost told reporters after the game. “This team needs to get some wins under its belt and get some confidence. That being said, I think there’s a lot of good things and disappointing things that happened today.”

One of those good things was the play of the Blackshirts. The defense scored 14 total points, recovered 2 fumbles, recorded 4 sacks and had 9 tackles for loss. Additionally, senior cornerback Eric Lee had 2 interceptions, including a pick six and sophomore corner Cam Taylor had an interception as well.

“The defense won the game for us,” Frost said. “The defense that I’ve been seeing all fall camp, showed up today.”

The stagnant offense was aided as well by a 76 yard punt return touchdown by junior JD Spielman in the third quarter that widened Nebraska’s advantage to 28-7.

If not for the three touchdowns the Husker’s defense and special teams scored (the most non-offensive touchdown’s NU scored in a game since their 31-3 win over Wake Forest in 2005), Nebraska likely would’ve needed overtime to take down the Jaguars.

Sophomore quarterback Adrian Martinez, a preseason Heisman hopeful, looked harried during most of the game. Martinez threw an interception in the second half and didn’t throw a single passing touchdown. On the ground, he wasn’t much better, picking up a grand total of 6 rushing yards.

Redshirt freshman Cam Jurgens, in his first career start, was replaced at halftime by another redshirt freshman, Will Farniok. Frost said after the game that Jurgens had surpassed his “pitch count,” yet Jurgens did not perform particularly well, snapping a number of balls high, one of which resulted in a team loss of 20 yards.

Martinez was critical of the offensive performance after the game, saying that “it’s probably the worst we’ve played in a long time.”

The Huskers looked a bit brighter, at least on the ground, once sophomore running back Maurice Washington got in the game. Washington started the second half, as Frost revealed after the game that the sophomore had to serve a half-game suspension. Washington is facing two criminal charges back in his home state of California, including a felony. He has a hearing set in a Santa Clara County court on September third.

Frost said that he, along with the rest of the coaching staff and university officials made their decision on Washington late Thursday night/early Friday morning. Frost added that he wouldn’t consider any other additional discipline “until the matter’s completely adjudicated.”

Washington finished with 39 yards on 6 carries with a long of 16. Dedrick Mills, who started in his place, picked up 44 yards on 15 carries and scored two touchdowns and lost the football once.

However, Nebraska only had a total of 98 rushing yards. They also only had 178 passing yards, as opposed to South Alabama, who had 231 yards through the air.

Frost made it clear though after the game, the Nebraska has their work cut out for them.

“You know, I didn’t know going into this game that there’s a lot of buzz around us,” Frost said. “We’re ranked in the top 25. We certainly didn’t look like that type of team today, but I know we can be, based on what I’ve seen in practice.”

Nebraska will take on Colorado next week. Kickoff is set for 2:30 but coverage on KLIN will begin at 9 a.m. with an abbreviated KLIN Husker Hour.

In other news and notes: