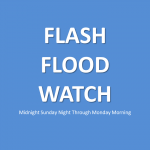 The National Weather Service has issued a  Flash Flood Watch for portions of southwest Iowa and Nebraska, including Lancaster County from midnight CDT tonight through Monday morning.  https://forecast.weather.gov/showsigwx.php?warnzone=NEZ066&warncounty=NEC109&firewxzone=NEZ066&local_place1=Lincoln%20NE&product1=Flash+Flood+Watch&lat=40.82&lon=-96.68#.XVB9NPJKiUk

Thunderstorms will be capable of producing heavy rainfall up to 1 to 3 inches tonight, with locally higher amounts possible.

Low-lying, flood-prone, and urban areas will be most susceptible to the dangers of flash flooding. Areas near rivers, creeks, and streams may become flooded during and immediately after heavy rainfall.

Be very careful if driving at night as flood waters are very hard to see.

PRECAUTIONARY/PREPAREDNESS ACTIONS… A Flash Flood Watch means that conditions may develop that lead to flash flooding. Flash flooding is a very dangerous situation. You should monitor later forecasts and be prepared to take action should Flash Flood Warnings be issued. 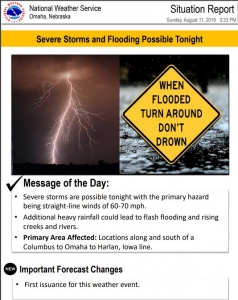 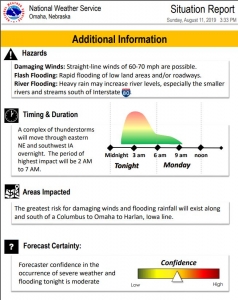 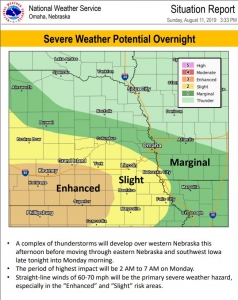 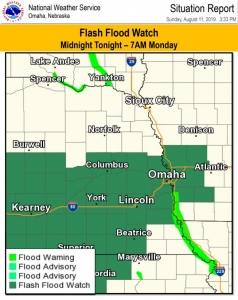 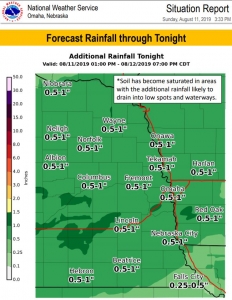 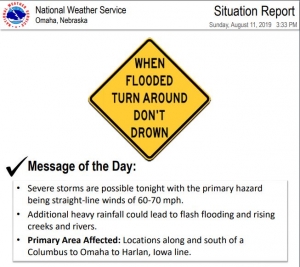