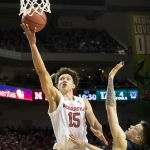 Nebraska’s Isaiah Roby was drafted by the Detroit Pistons as the 45th overall pick in the second round of the NBA Draft on Thursday. However, Roby is is actually headed to the Dallas Mavericks, as they traded Detroit for the pick.

Roby is the first Husker to be selected in the draft since Venson Hamilton was drafted by the Houston Rockets in the second round of the 1999 NBA Draft. Also, Roby was the earliest a Nebraska player has been selected since Tyronn Lue was chosen as the 23rd overall pick of the draft in 1998.

Roby’s decision to forgo his senior season at NU paid off for him. On Sports Nightly earlier this month, Roby said he felt that the work outs he did in the lead up to the draft made him confident that he was ready to make the jump to the NBA.

“This summer was really huge for me. Training against all of these guys that you know, some guys were projected Lottery picks and some guys were locks for the first round… and I’m going up for these guys and (I thought) ‘I’m better than these guys.’”

However, Roby said that the hiring of Fred Hoiberg made the decision he had to make a lot more difficult.

“Obviously, he (Hoiberg) played in the NBA, coached in the NBA, he’s got a lot of NBA ties and also he’s shown success in college as a coach,” Roby said. “That was kind of in the back of my mind like ‘now I have to go back to school and improve.’ But at the same time, the opportunity that I had in the present was too good to pass up on.”

During his junior campaign, Roby averaged 11.8 points, 6.9 rebounds and 1.9 blocks per game, all career highs for the 6-foot-8 forward. He was the only Big 10 player to rank in the top 10 in the conference in both steals and blocked shots.

James Palmer Jr., another Nebraska player, wasn’t drafted, but stands a good chance at getting selected on a summer league team. Palmer worked out for eight different NBA teams in the weeks leading up to the draft.

The 6-foot-6 guard averaged 18.5 points per game during his time at Nebraska, ranking second all time on the Husker’s career scoring list. Last season, he averaged 19.7 points, 4.2 rebounds and 3 assists per game.