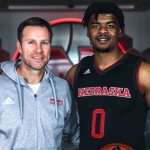 The Nebraska basketball team added another commitment on Wednesday in Derrick Walker, a transfer from Tennessee.

The 6-foot-8, 236 pound forward hails from Kansas City, Missouri. This past season with the Volunteers, Walker averaged 0.8 points and 1.1 rebounds per game. He played on average, 5.3 minutes per game, appearing in 30 games. As a freshman, he averaged 1.9 points, 2.2 rebounds and 8.8 minutes per game in 34 appearances.

Additionally, Samari Curtis became the fourth commit for the Huskers shortly after Walker announced his intent to play for Nebraska. Now sitting at 14 scholarship players on the roster, Nebraska will likely see some attrition, considering the NCAA allows only 13 scholarship players for each basketball program. The likeliest player to leave is Isaiah Roby, who is currently at the NBA Combine in Chicago.