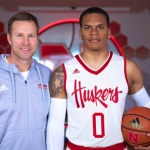 Shamiel Stevenson, a 6-foot-6 guard/forward transfer from Nevada announced via Twitter Friday afternoon that he would be committing to Nebraska. Stevenson is eligible to play starting the spring semester of 2020.

“We are excited to add Shamiel to our program,” NU basketball head coach Fred Hoiberg said in a press release. “He brings a lot of versatility and physicality to our roster. With his size, strength and wingspan, Shamiel fits in perfectly in our system with his ability to play several positions. He also possesses the toughness and maturity needed to play in the Big Ten.”

Stevenson originally played for Pitt for two seasons before transferring to play for the Wolfpack. During his freshman year at Pitt, he played in 32 games, averaging 8.5 points and 4.4 rebounds per game. However during his sophomore season, he only appeared in four games, the likely catalyst that prompted him to transfer to Nevada.

Stevenson signed for the Wolfpack back in March, but shortly thereafter, their head coach, Eric Musselman, departed to become the head coach at Arkansas.

Nebraska now has three open scholarship spots on the roster. They could have up to four, depending on if Isaiah Roby decides to return for his senior season. Since Fred Hoiberg was hired in late March, he’s signed four transfer players, excluding Stevenson.

Next season, the Huskers might only return one player – Thorir Thorbjarnarson – who actually saw playing time at Nebraska during the 2018-19 season.

Thankful to be apart of the @HuskerHoops family 🙏🏾🔴 #FORTHEFAMILY#TMC pic.twitter.com/NBmKHTNl3u