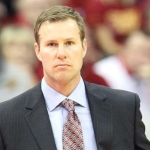 Abdelmassih told Braziller that “the best decision was to take the next opportunity.” Abdelmassih and Hoiberg worked in the NBA together, beginning with their time in the Minnesota Timberwolves’ front office. Henry coached with Hoiberg in the NBA while he was with the Bulls. Most recently, Henry was the head coach of Chicago’s G League team, the Windy City Bulls.

Hoiberg will be introduced at a press conference at 3 o’clock on Tuesday, which will be carried live on KLIN.