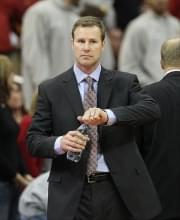 Multiple sources have told the Lincoln Journal Star’s Chris Basnett that former Chicago Bulls and Iowa State head coach Fred Hoiberg has had “contact” with Nebraska to become their next head coach.

Watch Stadium basketball analyst Jeff Goodman tweeted out on Monday that Hoiberg is the “front runner” for the job, prompting speculation that current head coach Tim Miles is on his way out from the program.

Miles has been at the helm since 2012. Outside of the 2013-14 season, the Huskers have failed to qualify for the NCAA Tournament and have finished 10th place or lower five times in the Big 10.

Miles’ current overall record is 115-113 with NU. This season, Nebraska ultimately was able to qualify for the NIT, after winning three of their last four games. However, the season was largely a disappointment, as the Huskers finished 13th place in the conference, despite the fact that they returned four starters from a team that won 22 games and was tied for fourth place in the league last year.

If Nebraska AD Bill Moos does decide to move on from Miles, hiring Hoiberg would make sense. He is one of the highest profile college candidates avialble, and he has close ties to the University. Besides being born in Lincoln, Hoiberg’s niece works in the Nebraska basketball office and his grandfather, Jerry Bush, coached the Huskers from 1954 to 1963 according to the Lincoln Journal Star.

The 46 year old Hoiberg spent five seasons as head coach of the Iowa State Cyclones, before he made the move to the NBA to coach the Chicago Bulls. With ISU, Hoiberg made four NCAA Tournament appearances, including a Sweet Sixteen run in the 2013-14 season.

Hoiberg had less success in Chicago however, making the playoffs only once in four seasons before being fired in 2018.

For now though, Miles is in charge of the Huskers. They’ll be taking on Butler in round one of the NIT at Pinnacle Bank Arena on Wednesday.