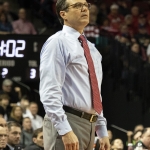 Tim Miles’ job is safe – at least for now. In a statement, Nebraska Athletic Director Bill Moos said “We will await Sunday’s announcement to see if we receive an invitation to participate in the NIT. Once our season is completed, my evaluation of our men’s basketball program will draw to a close.”

It came shortly after Nebraska’s loss to the Wisconsin Badgers in the Big 10 Tournament Friday afternoon. The Huskers made an improbable run, defeating both Rutgers and Maryland in back to back days when they only had 8 available players.

Sooner or later, the fun had to end for Miles and company. It finally did on Friday, but the last 72 hours for Nebraska basketball have been magical for Nebraska, in a season that seemingly had careened off course one month ago.

An NCAA Tournament bid isn’t possible to obtain for the Huskers. But they’ll have something to hang their hat on after what they achieved in Chicago.

Nebraska fought hard in all three games, but it was the Badgers who ultimately prevailed. Wisconsin began the game on an 8-0 run, prompting Miles to take a timeout.

Shortly thereafter, Roby was called for offensive goal tending. Tim Miles got T’d up. The Badgers made both their free throws, and then hit a three to complete a 7 point swing to make it 17-8 Wisconsin with around 12 minutes to go in the half.

Turnovers plagued NU, as they turned the ball over 4 times over the next six minutes. Wisconsin would again take a 13 point lead, but Glynn Watson Jr. sparked a run, scoring 8 points in three and a half minutes to make it a 5 point game at halftime, 34-29, the Badger lead.

Watson would continue his dominance in the second half, scoring seven points in the first five minutes of action. Nebraska threw everything they had at Wisconsin, but it wouldn’t be enough.

With 38 seconds to go in the game, the Badgers hit a dagger to make it 60 to 55. It proved to be insurmountable, as Wisconsin hit their free throws and took care of the ball, icing out the game to hold on to a 66-62 victory, advancing to Saturday’s semifinal against Michigan State.

Watson scored 23 points in a tremendous effort from the senior. Palmer had 15 and Roby scored 13. From the floor, Nebraska shot 38% compared to Wisconsin’s mark of 48%.

The Huskers shut down Ethan Happ for the most part, holding him to 4 points, going 2-4 on his field goal attempts.

Nebraska has a good chance to make the NIT, but it still remains unclear even with Moos’ statement, whether Miles has shown enough improvement for Moos to retain his job even if Nebraska makes the NIT.

One thing is for sure, Miles has done a remarkable job of turning his team around. It just might not have been enough.