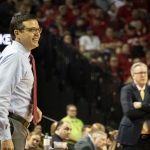 A jubilant Tim Miles received a standing ovation as he walked off the court. No, his team is not in contention for the NCAA Tournament (barring a miracle in Chicago). They aren’t even a lock to make the NIT. But on a relatively meaningless day, Nebraska won against all odds.

They were depleted – down two starting players (Isaac Copeland and Thomas Allen) to injury and they were also without Nana Akenten, who was suspended by Miles just a few days prior to the game for a violation of team rules.

By the second half, things looked hopeless for the Huskers. They trailed by 16 points with 17 minutes to go in the game. But the team didn’t quit. Down 9 with 50 seconds to go, something clicked for NU at Pinnacle Bank Arena.

James Palmer Jr. sunk a triple to make it a two possession game with 47 seconds left. Hawkeye forward Luka Garza made both of his free throws after Tanner Borchardt was forced to foul him with the game clock winding down.

Glynn Watson Jr. wasted no time getting down the court, nailing another three ball for NU with 42 seconds left. Then, Thorir Thorbjarnarson sent Iowa guard Jordan Bohannon to the line. Bohannon made both, so it was still a 7 point game with 40 seconds to go.

Palmer pulled up from deep the very next possession and nailed the shot. Isaiah Moss lost the ball in the backcourt following the Hawkeye’s inbound pass, allowing Palmer to grab the ball and feed it to the freshman Amir Harris, who drew a foul. Harris hit his free throws, which made it a two point game with less than 30 seconds left in the game.

Joe Wieskamp was fouled, who then made his pair of free throws to extend the Iowa led to four, but Watson jacked up and made yet another three to make it a one point game. After that, Connor McCaffrey, son of Iowa head coach Fran McCaffrey, split his free throws, meaning that NU had the option to go for the game winner or the tying basket with 19 seconds left. Palmer took it right to the rim to tie the game up, and Bohannon’s last second three point shot was no good, sending it to overtime.

The Huskers were perfect in OT, outside of a couple of misses at the charity stripe from senior Johnny Trueblood. A Watson three ball had the Huskers up by 2 with 1:15 left on the game clock, but it would not hold, as Iowa’s Nicholas Baer hit a layup after drawing contact from Harris. Baer wasn’t able to complete the three point play, which kept the game tied at 91.

With a 7 second differential between the shot clock and the game clock, Harris went right at the basket and got the go ahead layup with 10 seconds left. Bohannon would get one final shot off, a three point field goal try that was blocked by Thorbjarnarson to seal the comeback victory for the Big Red.

Following the game, Watson said the team was able to pull themselves together, despite the speculation surrounding Miles’s future as head coach of Nebraska.

“We were just playing for Nebraska, playing for Coach (Miles) and our team; each other, basically,” Watson said. “I don’t really try to pay attention to outside things, and I know they talk about it, but it’s nothing I can do, it’s nothing anybody else can do. We’ve just got to keep fighting, and we’ve got to fight for each other.”

A visibly relieved Miles had nothing but praise for his players. “I’m just so proud of these kids. Never stopped fighting. Never stopped believing. And I’m just so happy for these seniors. What a way to celebrate senior day.”

Palmer finished with 27. Watson and Isaiah Roby both had 23. Although Trueblood didn’t score, he was plus 18 in the +/- category in the 26 minutes he was on the floor.

With the Big 10 Tournament next, Nebraska would need divine intervention to win all their games in Chicago and make it to the NCAA Tournament. But maybe it isn’t so ludicrous, given what just happened at PBA on Sunday.

They’ll play Rutgers at 5:30 on Wednesday. Coverage will begin at 4:30 right here on KLIN.