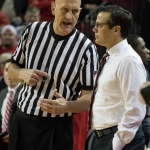 “You’re going to get fired,” a Michigan State fan sneered at Nebraska basketball coach Tim Miles from the stands of the Breslin Center towards the start of the game. “You think so?” Miles shot back. Play began, but Miles couldn’t resist another rejoinder. “Maybe they will hire you,” Miles fired back, according to reporters at the game.

It was a remarkable exchange, and indicative of just how far the Huskers have fallen. Once a team projected to be a five seed in the NCAA tournament, now have cratered out, having only won four games in 2019.

Tim MIles the Nebraska coach was just yelled at by someone in the crowd, "Your going to get fired." He looked up, "You think so?" Play resumes and he yells at the man again, "Maybe they will hire you." WOW

The Spartans were the team that handed the Husker’s their first loss of their seven game losing streak that lasted nearly a month. This time around, Michigan State began to boat race Nebraska early on, leading by 18 by the halftime break. Spartans forward Kenny Goins already had his career high in scoring with 21 points.

However, the Huskers didn’t fold in the second, cutting the lead down to seven points midway through the half, but a disastrous sequence shortly after that swung the momentum firmly away from Nebraska.

Nana Akenten got called for a hook and hold, a flagrant foul, resulting in a five point swing for the Spartans. Michigan State nailed a triple after knocking down both of their shots from the charity stripe to make it 69-55 after Akenten’s foul.

Nebraska never recovered after that, going on to lose by 15, 91-76. The score line may look similar to Thursday night’s loss to the Michigan Wolverines, but it doesn’t reflect the intensity the Huskers showed in the second half

James Palmer Jr. scored 30 points, just four shy of his career high in a valiant effort from the senior. Just one week ago, Miles said that Palmer had to miss practice to attend his grandfather’s funeral.

“You could see he came back feeling better and looking better and more energized,” Miles said. “I think that was an important process to go through for a young guy.”

Glynn Watson had a solid effort as well, dropping 25 points, hitting five of his 10 attempts from beyond the arc. Also, after shooting an abysmal 31.3% in the first, the Huskers were able to correct their course, improving to 53.3% from the floor in the second. But none of that will matter to an embattled coach and a team that can’t buy a break.