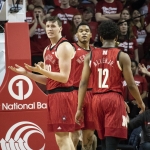 It was a predictably rough night for the Huskers. Nebraska is a team that is out of energy and out of ideas. They got ran out of Crisler Center, getting mowed down by Michigan, 82 to 53.

The halftime stats are telling. Nebraska shot 0-8 from deep. The Wolverines on the other hand, went 6-8 from beyond the arc. James Palmer Jr., Thomas Allen, and Isaiah Roby all entered the locker room at halftime without a single point to their name. All three were benched to start the second.

Speaking about his decision to sit those individuals after the game during his interview with the Husker Sports Network, NU head coach Tim Miles said that he “almost benched all five of them (the starters),” frustrated with their lack of focus.

The Huskers did show brief signs of life following the halftime break, however. Nebraska chipped into Michigan’s 23 point lead, whittling it down to 17 with 16:38 remaining on the clock. Ultimately, it wouldn’t make any difference at all. The Huskers wound up losing by 29 points.

Miles noted that games are “rarely decided by halftime” but it was apparent by the performance he saw from his squad Thursday night that his team didn’t have any fight left. “We did not come with a mentality that is equal to Michigan… If you don’t come with the same mentality of a team that’s really really good, this is what happens,” Miles said.

Palmer finished with a season low seven points, going 3-15 from the floor. Nana Akenten was the team’s top scorer with 11 points in 10 minutes of action, but he had to exit the game prematurely in the second half with an injury. The status of Akenten’s injury is not known as of this time.

Allen also limped off to the locker room during the second half with an apparent injury to his leg. Miles said after the game that it appeared to be “significant,” but did not divulge any further details.

Nebraska shot just 34% on the night. They also lost the rebounding battle 43-31 and they only hit two three pointers all night. Michigan though, hit a season high 12 shots from deep.

The Huskers have struggled mightily against ranked teams this season. They’re now 1-7 on the year against teams in the top 25. The loss worsens NU’s record to 15-14 overall and 5-13 in Big 10 play.

Next, they’ll square off against the Michigan State Spartans in East Lansing. That game is set to tip-off at six o’clock. Pregame coverage will begin at five on KLIN.