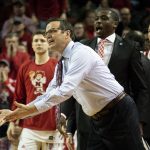 If the Husker’s season wasn’t already over, it ended Tuesday night. A listless Nebraska team was handed their most lopsided defeat of the season in a nearly empty Bryce Jordan Center. Since they joined the Big 10, Nebraska has only won once on Penn State’s home floor.

The pair of three balls the Huskers hit to start the second half to cut down the Nittany Lion’s lead to 14 was one of the few bright spots of the evening for NU. Although Isaiah Roby did have solid numbers, going 8-10 from the floor for 17 points and James Palmer Jr. scored 24, it was inconsequential on the game’s outcome.

Lamar Stevens and Rasir Bolton did do damage, however. They scored 29 and 21, respectively. They combined for five three pointers on the evening. In total, the Husker’s surrendered 11 threes, as Penn State shot 50% from downtown.

When Purdue comes into town on Saturday, Nebraska will be playing for pride. That is, if they have any left.