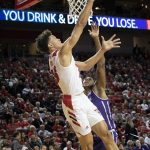 The Nebraska basketball team secured their second consecutive win Saturday night, in a low scoring affair against Northwestern, 59-50. The Huskers held the Wildcats to their second lowest point total of the season. Also, Tim Miles is now 51-5 as head coach of Nebraska when holding opponents under 60.

The Huskers, much like Northwestern, struggled to find a rhythm on offense. However, Isaiah Roby was able to pick up the slack, putting in the performance of his career. Roby had 19 points, 16 rebounds, and 5 blocks. The last Nebraska player to have at least 19 points and 16 rebounds in a game was when Aleks Maric dropped 32 points and pulled down 16 boards against Missouri back in 2008.

“I would say I got challenged by my teammates a lot just to be more aggressive on both ends,” Roby said. “That was the biggest thing for me.”

Senior forward Tanner Borchardt conceded that Roby is the more versatile player, but stopped just shy of showering Roby with too much praise. “He’s more athletic than me, just by a little bit,” Borchardt said. “But if we were to stream some Fortnite videos, I think things would be different.”

Roby had just 7 points at the half, and 5 rebounds. But in the second, Roby came alive, dominating on both ends of the court. In the second half, Roby scored 12 points and had 11 rebounds. Additionally, three of his five blocks came in the second.

“He had those two blocks early and it kind of sent a message,” Miles said. “Then he went away for a while from that rim protection type of thing, but boy he ended the game with a flourish.”

Having put their seven game win streak behind them, the team is playing better together.

“Yeah you can definitely see the morale starting to rise a little bit,” Borchardt said. “It is a fun environment to be in obviously when you are winning and no one wants to be in that losing streak, but it felt great to get that monkey off the back.”

Despite the win, depth is still a major concern for this team. Nebraska did not dip into their bench at all in the second half, the second time they’ve done so this season. The last game they did not sub in was against the Husker’s next opponent – Penn State.

Nebraska will take on the Nittany Lions on the road on Tuesday. Pregame coverage will begin at 5 o’ clock on KLIN. Tip-off is at 6.