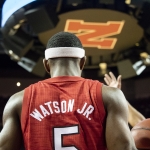 It wasn’t jubilation for the Huskers in the locker room following their first conference road win of the season. They were just glad it was finally over.

After back to back road losses to Iowa and Maryland, and an uninspired win against Penn State, Miles’s squad needed to catch a break. They found it in Bloomington.

Nebraska never trailed in the contest. They began the game strongly, jumping out to a 9-0 lead to start the first half. The Huskers ultimately built their lead to 18 points in the first, but the Huskers went the next eight minutes without a field goal, allowing the Hoosiers to claw their way back into the game.

With the lead whittled down to six, Isaac Copeland knocked down a triple and James Palmer Jr. slammed one through the hoop just before the buzzer to give Nebraska a nine point lead heading into the halftime break.

With the help of Glynn Watson’s 12 second half points, Nebraska held off the Hoosiers to secure the 66-51 victory. Watson’s 15 total points put him ahead of Stuart Lantz on the all time team scoring list, right at number 15.

Until Monday night, Indiana had not lost at Assembly Hall this season. Since they’ve joined the Big 10, the Huskers have had quite a bit of success at the venue, now 3-2 in Bloomington following the win. Nebraska is now 13-4 overall and 3-3 in the conference.

More importantly though for Miles, he was able to prove to pundits and disgruntled fans alike that the Huskers are a quality team. As Miles put it postgame – “We don’t stink.”