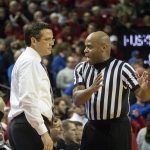 Nebraska fell to Iowa in Iowa City 93-84, dropping their second straight Big 10 game. With the loss, the Huskers are now 11-4 overall.

Nebraska never appeared to look in command throughout the contest, but with the help of James Palmer Jr., things appeared to be shaping up for Nebraska right before halftime. Palmer cut the Hawkeye lead down to one point after converting a three point play with three seconds left on the clock.

However, Hawkeye guard Jordan Bohannon had an answer. He threw up a contested three pointer right before the buzzer from well into three point territory. The shot went in, extending Iowa’s lead to four points at the half.

It was only a sign of things to come. Bohannon would go on to score 22 more points, ending up with a total of 25, his season high. After the game, Nebraska basketball head coach Tim Miles called Bohannon’s halftime buzzer beater a “difference maker.”

The 44 points Nebraska allowed in the first were the most they had given up in the first half all season. The second half didn’t fare much better for the Huskers. Nebraska eventually switched to a 1-3-1 zone which stymied the Hawkeyes on a number of possessions, but Iowa had a zone defense of their own which disrupted the Husker’s offensive game plan significantly.

“There were certain plays out there tonight that we tried to hit home runs, to try and make this gigantic play that we didn’t need to,” Miles said. The head coach also expressed his frustration with his defense.

“I was just disappointed with our man to man defense and rebounding,” Miles said. “We talked about playing with urgency in practice. We practiced really hard and well yesterday but I don’t think we matched Iowa’s (urgency).”

From deep, Nebraska shot just 17.4%. They also had trouble keeping Iowa away from the foul line, as the Hawkeyes hit 29 of their 32 shots at the charity stripe. Six Huskers had three fouls or more on the day.

Iowa also had the advantage on the glass, out-rebounding Nebraska 40-31. Palmer eventually reached a point total of 20, but the senior never quite looked as dominant as he had in previous outings. Isaac Copeland tried to pick up the slack, but it wasn’t enough for the victory. He scored 24, a season high for the senior forward. Nebraska is still searching for their first conference road win.

Next, the Huskers will be back at home, taking on Penn State at Pinnacle Bank Arena this Thursday. Tip-off is set for eight o’ clock. Pregame coverage will begin at 7:00 on 1400, KLIN.