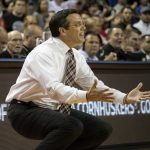 The Huskers dropped their second league game of the season, falling to the Maryland Terrapins on the road in a game that went down to the wire, 74-72. Terrapin forward Jalen Smith hit the go ahead floater with about three seconds left in the game to give Maryland their second Big 10 victory.

It was a back and forth contest all night, with the game being tied no less than seven times in the second half.

With a little over two minutes to go in the game, James Palmer Jr. made a steal which led to a dunk to give Nebraska a one point lead, 71-70.

However, Maryland snatched back the lead with around 30 seconds to go after Smith earned himself a basket at the rim. Palmer drew a foul on the other end the following possession to send himself to the line. He missed his first attempt, but hit the second to give him his 26th and final point of the night.

The Terrapins had just over 20 seconds to find the game winning basket, which Smith ultimately found. Following Smith’s floater, the Huskers had less than four seconds to get a shot off. A double teamed Thomas Allen tried to find his teammate Isaiah Roby, who was cutting to the basket, but after taking some contact, Roby was unable to come up with the pass, ending the game.

“The last shot, I thought we ran a really good action,” Nebraska basketball head coach Tim Miles said. “The pass was just a smidge short and we didn’t get the call.”

The Huskers came up short in a couple of key areas. Their performance at the charity stripe left something to be desired, leaving a total of eight points at the line. Nebraska was hurt from deep as well, allowing eight three pointers. Maryland made a little over 47% of their shots from beyond the arc.

“There’s going to be a lot more games like this,” Miles said. “We just need to figure out how to come out on top.”

Bruno Fernando of Maryland finished with a double-double, hauling in 17 boards and scoring 18 points. Smith was 2-3 from three point land, and had 15 points. Glynn Watson Jr. and Roby finished in double digits for the Huskers, with 12 and 11 points, respectively.

The Huskers (11-3 overall, 1-2 in B1G) will be back on the road, heading over to Iowa City for their next game, to take on the Hawkeyes.