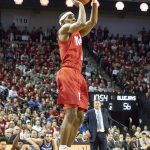 The Nebraska basketball team improved to 9-2 on the season after defeating the Oklahoma State Cowboys 79-56 in Sioux Falls, South Dakota. What was a close game at halftime turned into a blowout, as the Huskers hit their rhythm in the second half. James Palmer Jr. had 29 points, just one shy of his mark of 30 against Creighton last week.

Nebraska was 21-23 from the free throw line, and was 8-18 from beyond the arc. In the first half, Oklahoma State led by as many as seven points before the Huskers rallied back, hitting a trio of three pointers to take a 33-30 lead into halftime.

In the second, Nebraska never relinquished their lead, ultimately going on to win by 24 points. Nebraska held the Cowboys to a 37% field goal rate in the second half. Nebraska also prevented Oklahoma State from making a single three point shot in the second as well.

A few Huskers had to battle illness throughout the week. Freshman guard Amir Harris did not travel with the team. Also battling illness was sophomore guard Thomas Allen, who played 27 minutes, despite not being 100%.

It was a homecoming game for Nebraska basketball head coach Tim Miles, playing in front of a Husker friendly crowd in the Sanford Pentagon, 150 miles from Miles’s hometown of Dolan, South Dakota. “I’m just so proud of the guys and happy to get in here and play well,” Miles said. “Our guys are already talking about coming back.”

Next, the Huskers will be heading back to Pinnacle Bank Arena to take on Cal State Fullerton on December 22nd. Last season, the Titans made the NCAA Tournament, however, Fullerton has struggled thus far in 2018, as they’re 3-8 on the season.