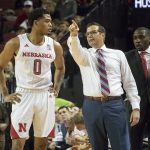 The Huskers defeated Illinois 75-60 on Sunday for their first conference win, improving to 7-1 on the season. It was a sloppy game at times. Nebraska went through a number of scoring droughts throughout the contest and turned the ball over a season high 16 times. The Huskers also picked up plenty of fouls, as both Glynn Watson Jr. and Isaiah Roby had four fouls to their name, nearly fouling out of the game.

Halfway through the first half, Isaac Copeland knocked down a jumper to give Nebraska a 12 point lead. However, the Huskers would not score another field goal until the three minute mark. It hardly mattered though, as their lead never dipped under 5 points during that stretch, thanks largely to Nebraska’s effort from the charity stripe. The Huskers were 14-16 from the line in the first half and 11-14 in the second.

“You just always worry about being too dependent on free throws, because quite frankly, you’re not in control,” Nebraska head coach Tim Miles said.  “I don’t think we made enough scoring plays in transition. That’s something we’re going to need to clean up.”

James Palmer Jr. was the leading scorer with 23 points on just four field goals, with 12 of his points coming from the free throw line.

“I thought we might try and set a Nebraska record to see how many free throws we’d let James Palmer shoot tonight,” Underwood said.

It was another tough loss for the Illini, who are coming off a two point defeat to the Notre Dame Fighting Irish. For Coach Underwood though, the two games aren’t even comparable. “No disrespect in any sort of capacity to Notre Dame,” Underwood said. “This place was just a little more juiced and (had) a little more atmosphere than South Bend.”

Nebraska will be switching their attention to their next game, where they’ll be heading up to Minnesota to take on the Golden Gophers. “When I walked into the locker room after the game, somebody had written ‘Minnesota’ on the board,” Miles said. “I thought that was a mark that someone’s mind on the right spot.”

That game will take place Wednesday night at eight, with a seven o’clock sharp pregame start on KLIN.