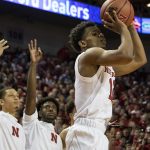 The Huskers improved to 5-1 on the Season Saturday, defeating Western Illinois 73-49. It was a slow start for Nebraska, as they trailed 9-6 heading into the first media timeout. The Huskers trailed all the way until the 13 minute mark, when Nana Akenten tied things up at 9 after knocking down a free throw. A couple of minutes later, Akenten made a layup to give Nebraska the lead, which they never gave up for the remainder of the game.

In the second half, the Huskers were able to extend their lead to 33 points. The lead was eventually whittled down to 18, which provoked the ire of Nebraska Basketball head coach Tim Miles. “You don’t build a 33 point lead on anybody unless you’re locking them up,” Miles said. “I thought we did a lot of things right for a long time. Now, we didn’t finish the job, so I’m not happy about that.”

It wasn’t always pretty on the offensive side of the ball either, but the Huskers were still able to secure a comfortable victory, thanks in large part to Glynn Watson Jr. and James Palmer Jr. After starting out the night 0-4 from the floor, Palmer wound up with 19 points on the day. Besides scoring 20 points, Watson tied his career high total of nine rebounds in a game, a nice total for a guard.

“I’m just cleaning up,” Watson said after the game. “Coach Miles told us we need to come out and rebound and play nice defense today, so that’s what I tried to do.”  Late in the second half, Watson had a chance to snatch his 10th rebound to earn himself a double-double, however teammate Isaiah Roby grabbed it instead. “It just wasn’t for me, I guess” Watson said with a smile.

Coming off a loss to Texas Tech in the Hall of Fame Classic in Kansas City, Nebraska gave themselves a much needed boost as they get prepared for their biggest test of the season – heading on the road to battle it out against the Clemson Tigers. Although they’re ranked 16th in the nation, Clemson’s stock has fallen slightly after losing to the Creighton Bluejays 87-82 this past Wednesday.

“I’m sure our guys will be excited. It’ll be a very difficult game,” Miles said. “I’m sure we’re the underdog, and that’s fair. It’s going to be something where we’re going to have to play a great game to win.”

Nebraska takes on Clemson this upcoming Monday at six o’clock.