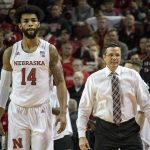 A strong showing in the 2nd half saw the Huskers pull away from the Missouri State Bearcats, notching Nebraska’s fourth consecutive 20+ point win, 85-62. Only leading by eight points at the half, the Huskers took control of the game, shooting 58.6% from the floor in the 2nd half, securing a comfortable victory to take the opening game of the Hall of Fame Classic in Kansas City. With the win, Nebraska improved to 4-0 on the season.

Nebraska was led in scoring by Isaac Copeland, who finished with 23 points. Copeland was 2-3 from beyond the arc, and was 9-14 on the night in field goals. Glynn Watson was electric from the three point line, going 4-8 from downtown. Watson finished with 16 points.

As a team, Nebraska made 39.4% of their shots from deep, and was 50% from the floor as a unit for the game. Nebraska did well defensively, limiting the Bearcat’s three point percentage to 25% in the second half. However, the Husker coaching staff made it clear after the game that there were clear issues that needed to be addressed.

“It was a tale of two halves for us,” assistant coach Michael Lewis told Kent Pavelka of the Husker Sports Network. “We struggled offensively in the 1st half.” Head coach Tim Miles echoed Lewis’s comments, and offered a reason why the second half saw improved play from the Huskers. “The biggest think I think, is that we just passed the ball more (in the second half),” Miles said. “In the first half, when we didn’t pass it, with just one or two passes, we were not good.”

James Palmer Jr., coming hot off his 29 point showing against Seton Hall, struggled against the Bearcats. Palmer shot just 3-11 on the night, finishing with eight points. “James just struggled,” Miles said. “Five turnovers. Three for 11 from the field. I’ll watch the tape with him.”

Nebraska will take on the winner of the USC-Texas Tech game on Tuesday night at 8:30. for the Hall of Fame Classic championship