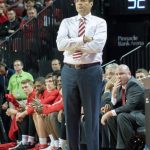 The signs of rust were apparent but that didn’t prevent the Huskers from rolling over the Wayne State Wildcats 75-40. The Huskers spread the wealth, as every single eligible and non-injured player on the roster got minutes, and scored to boot.

“You just want everybody to stick that foot in the pool and gauge the temperature a little a bit,” Nebraska head coach Tim Miles said. “So it was good. Everyone got a chance to contribute.”

However, the constant shuffling of the squad during the game might’ve translated to Nebraska unable to get into a rhythm early on.

The first five minutes or so for Nebraska was rough going. The first two minutes of the contest went scoreless, before Isaiah Roby found the basket. By the fifteen minute mark, Nebraska had scored just six points.

By halftime however, the Huskers still had a healthy lead, 39-21. Nebraska didn’t play their best, but they didn’t need to.

Roby led the way in scoring with 12 points. He was 3-7 from the floor, and a perfect 6-6 from the charity stripe. James Palmer wasn’t far behind. He finished with 10 points, but was 0-5 from beyond the arc.

Three point shooting was an issue for the Huskers. Nebraska shot 15.4% from three point land, going 4-26 on the night. It may be just an exhibition, and the Huskers could certainly afford to be more liberal with their shot selection, but that abysmal of a night from the three point line can’t bode well for the rest of the season.

“We’re not like a forty percent three point shooting team, but we need to be mid 30s,” coach Miles said. Some sloppy shooting aside, the Wayne State Wildcats couldn’t keep up with the Huskers athletically, and the mismatch on the court showed. The core four and the rest of the Husker squad for that matter, couldn’t be contained for too long of stretches.

Joining the core four on the hardwood to start, was sophomore Thomas Allen. Allen put in a solid performance, scoring nine points and pulling down seven rebounds. For Allen, getting the starting nod was a long time coming.

“It’s been a long road, since June,” Allen said. “Now I’ve got to seize the moment.”

Nebraska was victorious over Wayne State, but the win isn’t worth much more than a pat on the back. For now, the Huskers are 0-0 until Tuesday night for their first regular season game of the year against Mississippi Valley State Delta.